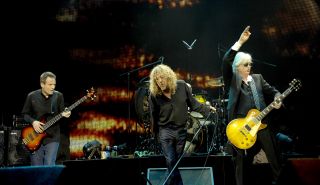 Led Zeppelin have announced that their Celebration Day concert film will be streamed for free on YouTube this Saturday, May 30.

The show (which featured John Bonham's son, Jason, on drums) set a world record for ticket demand for a single concert, with 20 million ticket requests. The band performed an acclaimed 16-song set of some of their most beloved classics, including "Stairway to Heaven," "Kashmir," "Good Times Bad Times" and many more.

Celebration Day will premiere on YouTube on Saturday, May 30 at 8 p.m. BST, and will be streamed in its entirety for three days.

To view the stream, head on over to Led Zeppelin's official YouTube channel.