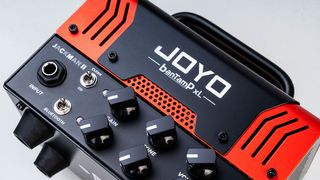 The latest addition to the company's Bantamp series of lunchbox heads, the XL-Jackman II features separate clean and overdrive channels - with independent controls for volume, gain and tone on each.

The clean and overdrive channels can be switched using a footswitch that is included with the amp.

Elsewhere, the amp features an onboard Bluetooth, an FX loop and a headphone output.

For more info on the amp, stop on by joyoaudio.com.