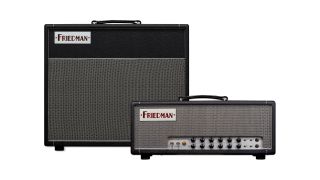 Friedman has debuted its new Twin Sister combo and head.

Each model features five 12AX7 preamp tubes, two 5881 power tubes, a transparent series effects loop for reverbs, delays and other time-based effects, and Global presence and Deep knobs - which can be dialed to tweak the tone of the two channels.

For more info on the Twin Sister, stop by friedmanamplification.com.