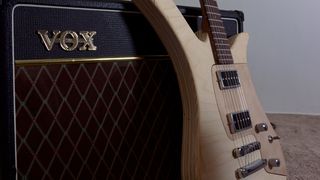 The key feature of the Phoenix is its removable wood module, which is attached to the guitar by magnets, and can be swapped out by users instantly, at any time.

Users can customize the modules to their heart's content. Guitarists can either customize a fully blank module by themselves, or in collaboration with Fern, or choose from humbucking, P-90 and single-coil pickup configurations. Buyers can also choose a tone wood for their Phoenix.

Though the Phoenix is still in the prototype stage, Fern says that the guitar's assembly is nearing completion, and that it will be in production in the next few months.

For more info and updates on the guitar, stop by fernguitars.com.