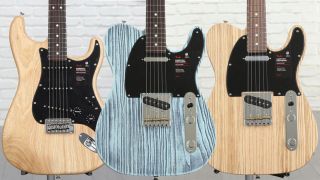 These striking American Performer axes feature the same Yosemite pickups, Greasebucket tone controls and rosewood fingerboards as their counterparts in the series, but are built with transparent-finished ash bodies, which are then sandblasted for a beautiful visual touch.

Aside from their finishes, the guitars are also notable in that they might be one of the last production-line sets of Fenders to feature ash bodies. The company announced in April that it would soon begin phasing the tonewood out of its production-line instruments due to climate change and invasive species-related ash shortages.

The sandblasted, limited-edition Fender Strat and Tele models are available now, exclusively at Sweetwater, for between $1,149.99 and $1,249.99.

The Tele is available in Natural, Daphne Blue and Surf Green finishes, while the Strat comes in a Natural finish.

For more info on the guitars, stop by sweetwater.com.