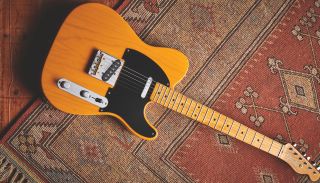 Fender has announced that it is discontinuing the use of ash on the bodies of its production-line guitars.

Though it's not the company's most popular hardwood, ash figures large in Fender's storied history, as the company's main hardwood in guitars and basses from 1950 to 1956.

“In order to uphold our legacy of consistency and high quality we, at Fender, have made the decision to remove ash from the majority of our regular production models," Fender said in a statement.

"What little ash we are able to source will continue to be made available in select, historically appropriate vintage models, as supplies are available.”

In an interview with Guitar World, Fender's Executive Vice President of Product, Justin Norvell, revealed that the difficult decision was made largely because of the Emerald Ash Borer beetle, a non-native invasive pest that has been destroying the unique "swamp ash" found in the American South - favored by Fender for its distinctive qualities.

Norvell also said that climate change played a significant role in the decision, worsening and lengthening floods in the region.

"We like the wood from the water, it’s more porous and that’s how we get the light swamp ash," Norvell said. "We actually only use the bottom part of the tree, where the water is.

"But the floods have not been receding, so these areas are underwater for two thirds of the year and it’s gotten to the point where we are sitting there for six or eight months waiting for ash we can’t get reliably. The beetle is still coming where there’s floods or not, so it’s really narrowing down."

Though swamp ash will still be available on a few Fender models, these will likely be limited to "higher-end American and Custom Shop stuff," according to Norvell.

"We were using ash all the way down through to Squier before! It’s going to be a lot more limited.”

To read the full interview with Norvell - where he also details how the change affects Fender's more immediate, 2020 plans - point your browser over to Guitar World.