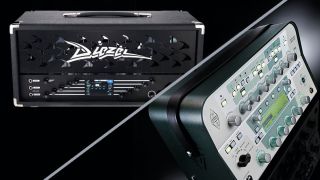 A little while ago, Diezel unveiled the VHX, a quite-impressive-looking 100W all-tube head.

Though its screen-enabled digital control and onboard impulse responses already made it stand out, we've recently become aware of one of the amp's other features, one that to our knowledge at least is unprecedented: a profiling log.

Diezel’s Leonardo Polito confirmed on the popular forum The Gear Page that this profiling log means that the amp detects when it has undergone a profiling process of any kind. It then logs that information in the amp.

According to a report from Guitar World, Diezel has adamantly denied that the technology was developed as a response to Kemper's "test tones" profiling process, and neither interferes with the profiling process nor prevents users from profiling the amp to begin with.

Some other hypotheses for the technology have ranged from the log acting as a, well, log of which channels have been profiled, making it easier for users to access a wider range of tones, to the log being a tool to prevent users from buying an amp, profiling it, then immediately returning it.

In any case, we'll certainly have more on this story as it develops.

Price and release date-wise, the Diezel VHX amp head will be available later this year for $4,899.

For more info on the amp, stop by sweetwater.com.