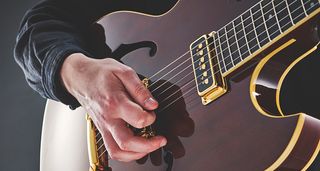 Let’s face it. If your goal is to achieve Guitar God status, you’ve got to be fluent playing lead over the entire neck, and not just in one position.

I’ve witnessed many students who can easily reel off the five pentatonic box shapes as exercises become flummoxed when trying to use those shapes in real-time soloing over a groove or song.

It occurred to me that they were habitually practicing scales from the lowest note up, and that this rote habit had actually stunted their ability to think musically and improvise freely.

This inspired me to come up with this useful hack to help them in their quest for fretboard mastery. The approach can be used in any key, but for demonstration purposes and familiarity, let’s deal with the ubiquitous guitar key of E.

First, identify and play, on the first string, the notes in an ascending E minor pentatonic scale - E G A B D, plus the octave E note - as shown in Ex. 1.

The goal here is to play each note with your first finger. Since the majority of lead playing is performed on the highest strings, intuitively knowing these go-to starting points is essential for improvising.

Once you have these points down, they can be used as “anchors” for economized five-note forms of the scale on the top three strings only, illustrated as block diagrams in Figures 1a-f and also as scalar runs in Examples 2a-f.

These three-string shapes will take a little woodshedding to get under your fingers, but they’ll ultimately provide you with a more direct and useful route to traversing the fretboard. Hint: Practice them first with alternate picking, then with hammer-ons and pull-offs, to explore different phrasing options.

Now, to help you gain fluency in all the shapes, I’ve incorporated each one into a sample solo over a 12-bar blues progression in the key of E, presented in Ex.3.

You’ll notice that the solo begins with the first form’s open shape (Ex.2a) and works its way up through the remaining forms (Examples 2b-2f) in two-bar groups, ending on the closed octave-position of Form I in the last two bars.

I recommend having at least one go-to phrase for each form, so feel free to steal my licks in addition to coming up with your own! Make a point to master all six shapes, and you’ll be flying up fretboard faster than Thor’s lightning bolts!