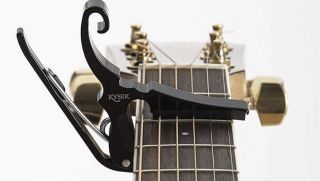 Using a capo to transpose keys is commonplace in the acoustic world, but have you ever tried using partial capos as a convenient way to transform standard tuning? Partial capos clamp down on some strings while leaving others open.

In celebration of its 40th anniversary the capo experts at Kyser sent over a care package with their Short-Cut and Drop-D partial capos. Kyser has been making capos from its Texas facility since 1980, beginning with the Quick-Change capo. Since then, the company’s range has expanded to include capos for acoustic, electric, classical and 12-string guitars, as well as for mandolins, ukes and banjos.

Kyser’s Short-Cut partial capo is designed to cover three of the four inner strings and can be used to simulate different open tunings. The Drop-D is primarily designed to cover strings one through five, simulating drop D. Here are a few tips and tricks to help you get the most from these devices and use them both creatively and effectively.

Perhaps the most common altered tuning is drop D, which normally requires dropping the sixth string a whole step, from E to D. Players have been doing this for ages, but drop D became trendy during the grunge era when a slew of hits, such as Foo Fighters’ “Everlong,” were performed in drop D, or taken deeper by lowering all the strings and detuning the low E string further to create drop C# and drop C.

The Drop-D capo takes things in the other direction. By placing it at the second fret and playing a D shape, you’re actually a step higher in the key of E, but since the sixth string is open, the tuning behaves like drop D, with that big tonic on the bottom.

The Short-Cut is a three-string partial capo, and clamping it at the second fret to cover strings five, four and three on a standard-tuned guitar facilitates a DADGAD-style sound. The tone is not as deep, of course, because once again we’re in the key of E rather than D, but the intervallic relationship is now the same: 1- 5 - 1 - 4 - 5 - 1.

Try copping Jimmy Page’s licks on “Black Mountain Side” from Led Zeppelin and notice how legit they sound, despite being a step and a half above the key on the recording. That’s because Page dropped DADGAD down a half step for his take on the classic folk tune, which helps illustrate our point that it’s the intervallic relationship, not the actual key, that is paramount.

Once you start experimenting with partial capos, the sky is the limit. Simply flipping one around to cover different strings leads to all sorts of revelations. For example, covering the second, third and fourth strings with the Short-Cut at the second fret creates an A chord, transforming standard tuning into one akin to open G. A bevy of bluegrass licks and Keith Richards–style riffs are suddenly under your fingers.

Move the Short-Cut a step up to the fourth fret, place a full capo behind it at the second fret and say hello to “Jumpin’ Jack Flash” in the key of B. Take the whole shebang up another half step to C and jump into “Start Me Up” or “You Can’t Always Get What You Want.”

Partial capos can also make commonly used open tunings sound more exotic, or turn an already exotic tuning into something even more adventurous. I’ve been having a blast with Kyser’s partial capos, creating chords and progressions I might never have found otherwise. And it’s much easier to carry around a few extra little accessories than an arsenal of acoustic guitars to accommodate various tuning or transposition needs.