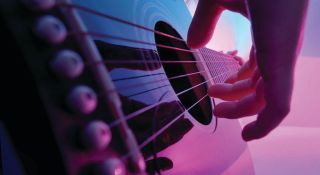 Ever been playing your acoustic guitar and suddenly noticed an extra bit of reverberation or the hint of a surprise harmonic? Those magical-sounding resonances, which seem to come out of nowhere, can occur almost anywhere on any string.

You may have never stopped to investigate why or how they happen, or to figure out how to conjure that kind of magic intentionally, but this month, that’s just what we’re going to do.

There are many ways to set a guitar string in motion, and the most common - playing with a plectrum while resting the heel of the palm near the bridge - is a resonance killer.

While that technique works wonderfully to control extraneous noise when playing an amplified electric guitar, it takes away some of the sonic magic available to us on an acoustic.

Try playing a few licks with your palm resting on the guitar’s top. Now try it with the palm completely lifted, allowing all the strings to ring out freely.

You’ll notice there’s a big difference in the sound, especially when plucking the first few strings without the heel of your palm muting the thicker strings. Now focus on making powerful downward plucks using your fingers or nails. Sounds super-resonant, right?

Exactly what is resonating more? It’s partially the top. Anchoring the arm and hand in the traditional way constricts the top’s bass side. Try anchoring with your fingers below the first string between the soundhole and bridge instead, and listen to the bass go boom.

Now move the anchor all the way off the top to just below the side lip at the waist, and notice how the top’s treble side is freed up. Finally, try playing the first few strings with no anchor whatsoever, and let upstrokes factor back into the picking mix. The resonance will be divine!

By freeing up all the strings to vibrate along with the plucked one, we’re allowing them to resonate sympathetically, just like the sympathetic strings on a harp guitar or any other instrument built with extra strings designed to ring out agreeably with the main strings.

If you take a closer look, you’ll find that hitting specific fretted notes triggers specific sympathetic strings to resonate. For example, plucking the fretted A at the second fret of the third string triggers the open A an octave below on the fifth string, adding low-end mojo. Use a plucking-hand finger to mute the fifth string and you’ll see just how much that strings contributes.

Now, without muting, fret and pluck the A at the second fret of the third string once again, and notice how a considerable amount of high harmonic A is also present following the fundamental. That’s three As for the price of one, and the real surprise is that a significant amount of that high harmonic is being generated elsewhere.

Pluck that A forcefully on the third string again, then quickly mute the string by lifting the fretting finger without actually taking it all the way off. Use a free finger to mute the fifth string, and you’ll notice the high A harmonic is still ringing out.

Finally, mute the fourth string and you’ll find that’s where much of the magic is actually happening. The sympathetic ringing of the D string triggers a high A as if you’d actually played a harmonic at the seventh fret.

Experiment with sympathetic vibrations and acoustic resonance by striking open strings and fretted notes with various types of nonmuted plucking all over the fretboard.

You’ll find that fretting any note will trigger its frequency counterpart, or octave, on any open string that’s free to ring, adding to the abundance of harmonics and overtones that give richness and shimmer to your playing.