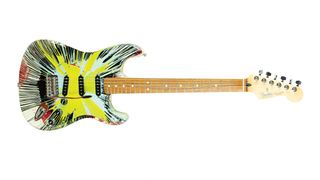 The quest to find the right pickups for Liberace, my Warmoth Stratocaster, goes back 20 years.

I’ve always loved how it plays and, especially, how it looks, with its white mother-of-toilet-seat pearloid wrap and matching headstock. It took five pickup sets before I got it to sound as good as it looks and plays.

But back in 2003, when I was still trying to figure out why it didn’t sound the way I wanted it to, I walked into Gelb Music in Redwood City, California, to pick the brains of its staff. Unfortunately, they couldn’t tell me much more than I already knew about the many factors that go into making a guitar sound good.

As I was leaving the store, a display featuring the then-new Made in Mexico Fender Splattercasters caught my eye (I’ve always been a fan of the garish). I wondered, 'What if this guitar has the sound I’ve been looking for?'

Lo and behold, it not only had the tone I’d heard in my head but also played like a dream. And it cost just $300! At that price, I figured it would be on par with Fender’s entry-level Squier line. Boy, was I wrong!

Other than the spin-art-meets–Jackson Pollock paint job, the only thing weird about this guitar is how great it sounds and plays, especially for its low price.

This guitar easily plays as good as anything in Fender’s American Standard line. It has a beautiful one-piece maple neck, a rosewood fingerboard with 21 frets, a standard six-point tremolo bridge setup, a five-way pickup switch and the standard Strat control knob setup, which is a global volume control with a dedicated tone control for each of the outside pickups.

Those three Fender single-coil ceramic pickups sound terrific and, in my humble opinion, compare favorably with some of Fender’s best offerings, in particular, the Eric Johnson pickup set.

They are even warmer than the often-preferred alnicos in that set, with just a bit more output. The Splattercaster also has an easily accessible truss-rod adjustment at the headstock and sports sealed tension-able Fender tuners.

I paid $250 for a new Splattercaster back in 2003, the only year they were offered. Given its rarity, the model has appreciated over time, much like the Japan-made paisley line, and is commanding prices between $750 and $1,000.

Other MIM guitars with standard finishes are selling for easily half of that, so if splatter isn’t your thing, consider that as an option.

The MIM line delivers high-quality instruments made in Ensenada, Baja California, just a three-hour car ride away from Fender’s Corona, California, plant. The same high-quality build standards apply to the Mexican lines, much of the same machinery is used in the manufacturing and American-made parts are often employed on the Mexican guitars (and vice versa).

There are important differences, of course, like neck-angle adjustments, staggered tuners and the two-point bridges found on the American Standard series. But for a fraction of the price of a Standard, you get a quality workhorse that’s built to last.