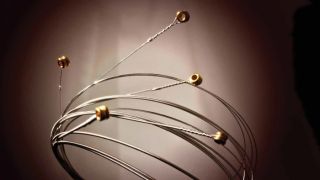 Confusion abounds in the strings camp, and much of it revolves around the inclusion or exclusion of one simple word: pure. Players seeking vintage specs tend to rave about nickel strings, generally following the time-tested premise “that’s what they used in the good-old days.” Plenty of products advertised as nickel strings, however, aren’t entirely golden-era formulations, using steel wraps plated with nickel, rather than wraps made entirely of nickel.

The confusion arises from the fact that some manufacturers don’t include the word “plated” on the labels for their nickel strings. For strings made to specs that were common from the mid ’50s to the late ’60s, you need to look out for the word “pure” in front of that “nickel.” But, even then, there are plenty of factors to consider.

As discussed in a thorough piece by former Guitar Player associate editor Barry Cleveland in the November 2009 issue, pure-nickel strings were the standard on electric guitars in Europe from around 1954, and in the USA from around 1957, before which other metal formulations were used. Nickel was arrived at as a middle ground between acceptable tone and output, as well as an easy playing feel that also wasn’t too hard on a guitar’s nickel-silver frets. These formulations were the standard up until the late ’60s, when, for a number of reasons, string makers began promoting new nickel-plated strings. This formulation rapidly took over the market in electric strings, and pure-nickel varieties nearly went extinct.

Pure-nickel-wound strings have a relatively smooth, warm tone, with reasonable (though not excessive) output. Nickel-plated strings, on the other hand, are a little brighter and have a little more output. As a result, they can make a guitar sound livelier in the early stages after a string change, with a little more snap and high-end sizzle. But this perception also changes more quickly, as string tone changes as the plating wears off. Pure-nickel strings give the impression of a longer consistency of tone, because there is no dramatic shift in their response, just a more gradual dulling of the pure nickel.

As you can already tell from the above, there’s no better or worse in the pure/plated-nickel dichotomy. It really depends on what sound you want from your strings, how often you’re willing to change them to retain a consistent tone, and how much you want to pay in the first place.

Pure-nickel strings by high-end makers such as Pyramid and Curt Mangan often cost more than twice the price of nickel-plated strings (although Fender’s long-standing 150 range, as used by countless stars in the ’60s, is relatively affordable). That said, their longer perceived life might mean you don’t spend much more in the long run.

There are also, of course, several other types of strings, many of which are great for players seeking even more power and punch than nickel-plated strings provide. Stainless steel, chrome, several varieties of coated strings, and other formulations are all available. All have their uses, and there’s no reason to feel you must play pure nickel just because that’s the way they did it in the good old days – unless that’s exactly the tone you seek.