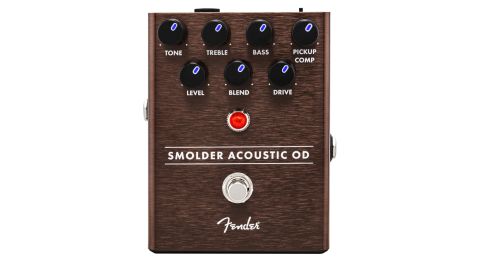 For its innovative design, broad tonal palette and distinct position in the pedal market, this pedal gets a thumbs-up from us

Rather, it was designed from the ground up with the acoustic performer in mind. In our January 2020 Frets feature, progressive bluegrass player Billy Strings spoke about his struggle to achieve overdriven acoustic tones and said he was looking forward to Fender’s new pedal. He recently received a Smolder and graciously shared some of his insights for this review.

The Smolder is specifically made to accommodate the piezo bridge transducers found on most modern acoustic-electrics. Piezo pickups excel at capturing the percussive nature and myriad nuances of the acoustic instrument.

The downside is that when you try to apply overdrive, all sorts of harsh top-end transients and trashy mids and lows come along for the ride. The Smolder is designed to mitigate the junk and accentuate the harmonically pleasing elements contained in the signal. The pedal also features a pickup-compensation knob. Crank it up to kill the piezo quack, or dial it back to open up the attack.

The Smolder is aptly named. Its overdrive isn’t scorching hot but rather in the realm of warm to sizzling, though it can also venture toward metallic. With the drive and blend controls in the middle range, Smolder simmers underneath your guitar’s natural acoustic sound.

Kicked up a bit, its creamy overdrive adds sustain and harmonics. Strum or pluck hard, and the pedal responds in kind; fingerpick, and the overdrive cleans up nicely; peg the drive and it ventures into “Ziggy Stardust” territory. Or as Billy Strings explained, “It can sound like an electric with humbuckers going through a high-gain amp, like an Orange.”

Back off the blend, and the overdrive ducks under the pure acoustic tone. The pickup-compensation control is the wild card, as its filters change the tone dramatically. Crank it up for a focused tone with copious highs, or turn it down for a bottom-heavy brown sound that unleashes more unbridled feedback and sustain.

You’ll definitely need to spend time learning how the controls interact with your particular guitar pickup and preamp system.

I auditioned the Smolder with an AER Compact 60/3 TE amp and two Taylor guitars from different eras: a new Builder’s Edition K24ce with Expression 2 electronics and a ’99 514ce with Fishman Prefix electronics. On the 514ce, I ran a second signal from a Seymour Duncan Active Mag soundhole pickup through a pedalboard and into a Fender Pro Reverb.

Performing a holiday gig with both Taylors and the Smolder, I was finally able to get excellent overdriven sounds from a review guitar, giving me the freedom to switch between instruments based on tunings rather than tones.

The Smolder also sounded fantastic in tests using the magnetic soundhole pickup through the acoustic amp, and that kind of flexibility means this pedal shall remain a part of my gig rig.

Billy Strings shared a similar appreciation for the Smolder after adding it to his setup, which includes a Preston Thompson dreadnought with a K&K pickup running through a few pedals into a Fender Deluxe Reverb.

“Its overdrive has the kind of headroom and clarity that really works with an acoustic guitar, adding sustain and gain that makes it feel and sound almost like playing an electric,” he says.

“It allows me to make a melody sing out in such a way that the fundamental sound of each note comes through primarily. I turn the pickup compression control up fairly high so I can get plenty of gain without adding a lot of extra noise or being on the brink of feedback all the time, which is what I was dealing with before.”

The Smolder pedal has a couple of bonus features. A switch on the back engages cool blue “amp jewel” LEDs at the needle-points of the control knobs, which is handy for a quick visual reference when working on a dark stage.

Fender also included its convenient patent-pending flip-box nine-volt battery compartment on the pedal’s front edge. For its innovative design, broad tonal palette, distinct position in the pedal market - and for getting a thumbs-up from one of the acoustic guitar’s most adventurous young players - the Smolder Acoustic Overdrive earns our Editors’ Pick Award.