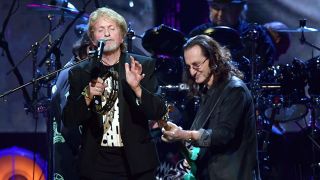 On April 7, 2017, vocalist Jon Anderson performed with Yes - his former band - at the the Rock and Roll Hall of Fame induction ceremony at Barclays Center in Brooklyn, NY.

It marked Anderson's first performance with the group since 2004.

Best of all, Yes - in this case, Anderson, Steve Howe, Trevor Rabin, Rick Wakeman and Alan White - were joined by a special guest, Rush bassist Geddy Lee. They opened with “Roundabout,” a classic track from 1971’s Fragile, which happens to be their first album to feature Wakeman.

Lee then left the stage, and the band - now joined by former Yes guitarist Trevor Rabin - performed an extended version of “Owner of a Lonely Heart,” the band's only No. 1 chart hit (from 1983’s 90125).

For this performance, guitarist Steve Howe played a Rickenbacker bass, most likely in honor of longtime Yes bassist Chris Squire, who died in 2015. Meanwhile, Wakeman switched to keytar.

Other former Yes members (and co-founders) were honored that night, including Squire, Bill Bruford and Tony Kaye.