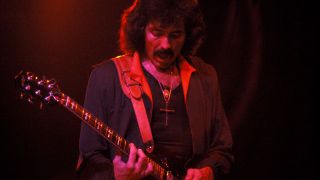 Black Sabbath lead guitarist Tony Iommi stands well over six-feet tall and plays like he has six fingers. Not bad, since several years ago Tony hacked off the ends of his middle and ring fingers on his right hand (he plays left-handed), and consequently had to completely alter his playing. Struggling with various types of plastic tips which he placed at the ends of the fingers, he has since gone on to become one of the more stylistic players on the rock scene today.

Tony always had an interest in music, though. His first aspiration was to be a drummer, but owing to lack of funds, he turned to a less expensive instrument. The guitar came in almost by default. After realizing that he couldn’t afford a kit of drums, and that an accordion just wasn’t what he wanted, he fell in with the guitar. “I got a guitar for a birthday present,” he states, “and things just went on from there: I got a better guitar and a better guitar.”

His first substantial electric guitar was a Watkins, which ran through a small tubed Watkins amplifier. During these early years of his playing, Tony would frequently get together with friends and jam, but nothing ever came about until he auditioned with Jethro Tull and scored the lead guitarist position. This was during 1969, following Mick Abrahams’ departure and preceding the band’s appearance in the Rolling Stones’ Rock ‘N’ Roll Circus. Tony was with Tull for the filming of the show only, and immediately left the band after the project was finished.

“It just wasn’t right,” he explains, “so I left. At first, I thought the band was great, but I didn’t much go for having a leader in the band, which was Ian Anderson’s way. As we are now [in Black Sabbath] there’s no leader. Everyone does their own part. Not only that, the communication between the band wasn’t too friendly.” Originally, Iommi had left Sabbath to join Tull, but swiftly returned to his former band after his experience with Jethro.

His first guitar with Sabbath was a Fender Stratocaster (year unknown), which was plugged into two Marshall (4x12) cabinets powered by two 50-watt amplifiers. As the band grew in popularity they started adding more cabinets, until they were offered an attractive advertising arrangement by Laney Amplifiers in England. Since that time, Tony has been using six 4x12 Laney cabinets which are fed by four 100-watt amps. They are channelled by plugging V-cords into the “normal” outputs (they have “treble” and “normal” sockets) of the four heads. For treble boost, he uses a Rangemaster unit which has been reworked (extra tubes and boosters) by the band’s roadies.

After using the Fender for several years, Iommi has changed to Gibson and now uses an old (year also unknown) SG. One major alteration has been the replacement of the pickups with specially built low-feedback units. Tony thought that the standard Gibson pickups fed back uncontrollably, and — though the sound they produced was more than satisfactory — the searing screeches that accompanied that sound made the pickups impossible to use.

The new ones cut down on the feedback, but don’t totally stop the unwanted noise. Other changes include the application of polyurethane to the neck to give it a lacquer-like finish, which resists corrosion of the wood and helps prevent the frets from wearing away. The frets themselves have been filed down, and new metal tuning pegs (replacing the original plastic ones) have been added. Because he’s always experienced difficulty in tuning his Gibson, Iommi has had several different bridges constructed (by the same designer of the low-feedback pickups).

His current bridge raises the strings to a higher position than usual, but it has brought the open strings and twelfth fret octaves into almost perfect sympathy. The bridge’s height also prevents the lightweight strings he uses from constantly rattling against the fretboard.

“It’s sort of an experimental guitar,” Iommi says. “Everything that can be done to a guitar has been done to this one. That’s probably why I like it, because I’ve got it exactly as I want it, apart from still having trouble with tuning.”

The change from Fender to Gibson came one night when the band was playing in Germany, and one of the pickups went out on Tony’s Stratocaster. Grudgingly, he snatched the Gibson, which he kept on stage for such emergencies, and, since that time, has never returned to a Fender of any model. The Gibson neck and fretboard appealed to him more than the Fender, as well as the ease with which he could bend notes. He now owns several Gibsons, including an old Les Paul with three pickups (with the original SG design), a newer model SG, and a Junior, which Leslie West gave him as a present. Among his collection of acoustic instruments are a Gibson J-50 and an expensive Guild guitar, though he confesses that the disarray over his entire house prevents him from really knowing what he owns.

All his guitars had to be switched around to accommodate his left-handedness. Tony now realizes that when he first started he could have probably just turned a right-hand guitar around and played it upside down. But he didn’t, and now must either buy a left-handed guitar, or alter any instrument he does purchase to fit his needs. To add to his southpaw problem, Tony must also contend with the amputation he suffered years ago.

“You see, I can’t use right-handed instruments now,” he points out, “because I snipped the ends of my fingers off, and on a Les Paul you’ve got to get right up to the end of the guitar on a reversed right-handed instrument to hit the strings. Not many people know about that [the accident]. It happened years ago when I was doing electric welding. One day, I had to cut this sheet metal before I welded. Somebody else used to do it, but I had to do it this day because he didn’t come into work. And it was a faulty switch or something: Thhhht! I pulled it out, and it just gripped the ends and pulled them off.”

As fate would have it, the day of the accident was Tony’s last day on the job before he was to have left for Germany with a rock outfit. Feeling completely lost he decided to give up the guitar until a friend brought him a record of Django Reinhardt. After hearing what the brilliant gypsy guitarist did with just two fingers, Tony again took up the instrument, and slowly activated the two clipped fingers along with the two healthy ones.

“I had to start all over again,” he recalls, “which was kind of a drag. I have to wear things now because the ends are so tender. It’s helped me a little bit because now I use my little finger a lot.”

The “things” Tony wears are like little plastic thimbles which fit over the ends of the two digits to make up for the loss in finger-length and reach. He’s tried various sorts of adapters, but hasn’t really come up with any which are totally comfortable. Frustration at times over the accident, an ill-sounding guitar, and a poor performance used to bring out violent reactions.

“I’d get annoyed and pick the guitar up and throw it and smash it,” Iommi says. But those days are over, and Iommi can look back calmly.

“At first, I don’t think people realized how hard it was to learn to play like that. It involved a lot of determination, and a lot of hard work and practice. It [the accident] happened over eight years ago, way before Sabbath or Tull. And when I joined Jethro they even said, ‘What are those things on your fingers?’ When I told them, they were quite surprised to find I could play guitar with these. I’ve had to adopt a totally different way of playing because of these fingers. I mean it’s much easier when the flesh is there as it should be. Instead of, say, pulling a note, I have to sort of push it up to get a vibrato. These tips are a bit clumsy, and they slow me down and get in the way. I even have to wear leather on them to grip the strings. But it’s just something I’ll have to try and overcome.”

Tony has also had to search for the right string, which wouldn’t clink or buzz when pushed with those fingers. By combining Ernie Ball light gauge strings for the first and second, and Piccato light gauge for the remaining strings, he’s found a set that is comfortable for both chording and solo playing. Strings are changed twice a week and never right before a performance. Iommi feels that leaving them on any longer causes the strings to wear out over the frets, and makes them virtually impossible to tune.

A very percussive player, Tony hits the strings in his pick attack. He uses custom made picks which are fashioned after normal Fender picks in shape, but which lie between the thin and medium weights in gauge. Iommi explains that Black Sabbath tunes to a D onstage (instead of the customary E piano tuning) to get more depth.

“That’s one of the reasons why I don’t like using thick-gauged strings,” he adds, “because when I bend the strings it’ll rip my bloody fingers apart. On acoustic, I like lightweight gauge strings, as well, because I can get a nice sound from them.”

On stage, Tony uses no pedals at the present time, not so much from a religious dislike as from a pragmatic one: He feels they do more harm than good. Because the band tours the United States so frequently, they must contend with the different systems of grounding. In England, their Laney amplifiers give maximum performance, but over here the different ground setup causes the stacks to hiss and growl and perform below average. Therefore, adding any sort of extra unit to the line causes extraneous buzzes. In England, Tony uses a wah-wah and a mini guitar Moog, but found that using them in America caused a significant drop in amplifier power and sound.

The group is now searching for an American made system that won’t plague them with those problems. In the meantime, to accommodate for the ill performance of his Laney stacks in the U.S., Tony must set his amplifier on full volume. The “presence,” “middle,” and “treble” are also on 10 with no bass on the amp whatsoever.

The guitar volume is usually set on full because of the constant thundering chords he hammers out, and the three-way toggle switch (“rhythm,” “middle,” and “lead”) is placed on the up position for chording and in the treble spot for soloing. In the studio, Iommi uses these same settings, but only one 100-watt Laney stack. For a particular solo, though, occasionally he’ll use a Fender amplifier. On record, Tony delves into effects a little more than on stage as on Sabbath, Bloody Sabbath when he used a wah-wah, a Rotosound box (which makes the guitar sound like an organ), and various other boosters and phasers.