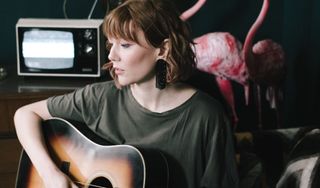 Though she's just 27, Molly Tuttle has been mesmerizing audiences in America, Europe and beyond for years now. Watching her perform though, you get the feeling that her already remarkable career is just the start of an even bigger arc that's mostly still to come.

Sure, from a purely musical perspective, Tuttle’s fast-’grass flatpicking, deep sense of groove and soulful singing are undeniably impressive. But this California-raised, Berklee-educated, Nashville-based guitarist transcends even this talent tri-fecta. As is the case with many great artists, it's the way Tuttle’s gifts coalesce in the form of great songs that is most astounding.

Speaking of great songs, on the latest episode of the No Guitar Is Safe podcast (which is presented by Blue Microphones) Tuttle picks up a sterling dreadnought built by Pre-War Guitars Co. and demonstrates for me (and you!) the inspiration and techniques behind several of her tunes, including “Take the Journey," (off last year’s When You’re Ready), a song that's nearing three million streams on Spotify.

When I told Tuttle that I would find replicating the song’s highly rhythmic, steel-string, chords-plus-melody intro a daunting task, she slowed the part down, deconstructed it, and made it seem simple.

“The basic style I’m doing here is the same rhythm as clawhammer banjo,” says Tuttle, who, around age eight, began learning many useful bluegrass approaches and other techniques from her father, musician Jack Tuttle. “It’s based on the classic bum-ditty clawhammer pattern.”

Like many touring musicians suddenly grounded by the pandemic-induced lockdown of early 2020 onward, Tuttle had no choice but to re-channel her efforts. It wasn’t long into quarantine that she began recording from home (“I had to teach myself Pro Tools,” she says), playing virtual concerts and making music videos.

The result is a new album, called …But I’d Rather Be with You [Compass], and it finds Tuttle and producer Tony Berg re-imagining 10 of Tuttle’s favorite songs - a set that spans everything from classic rock (The Rolling Stones' “She’s A Rainbow”) and more modern pop (FKA Twigs' “Mirrored Heart”) to vintage punk (Rancid's “Olympia, WA”) and psychedelic rock (the Grateful Dead's “Standing on the Moon”.)

No matter which particular technique is involved in the song at hand, Tuttle has quite a knack for explaining, demonstrating and teaching it.

“Going to Berklee [College of Music] certainly helped,” says Tuttle, “because I had many great teachers who were amazing players who would very methodically break things down and explain to you exactly how to do something.”

These days, even during quarantine, Tuttle is too busy creating music to have much time to teach it.

“I’ve done a lot of teaching in my life, including teaching groups and at guitar camps,” says Tuttle. “Breaking down concepts so a group of people can understand them is quite helpful at teaching you how to teach. But much of what I learned about teaching came from my dad, who is also a music teacher. I actually started teaching when I was just 13 or 14 - when my dad had excess guitar students who needed a teacher and were okay with taking from a kid, basically.”

Stream our interview with Tuttle below, and check out all 121 other episodes of No Guitar Is Safe from your smartphone's Podcasts app, iTunes, Spotify, or wherever else you get your podcasts.