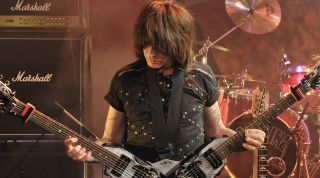 In the middle of his soaring solo on the 1985 big-hair big-snare metal classic “High Life” - by his then-band, Holland - Michael Angelo Batio launches into a series of fast, high-octane multi-octave major arpeggios that has that triumphant “metal horsemen galloping toward victory” sound that is so characteristic of classic shred.

What listeners might not realize about that section of music though, is what inspired Batio to come up with it.

“That came from simple four-note major 7 shape I learned from a book by jazz/rock guitarist Don Mock,” says Batio on the latest episode of the No Guitar Is Safe podcast (hosted by yours truly) before demonstrating the pattern on one of his new signature-model Sawtooth guitars.

“I’ve done a lot of concerts and clinics over the years, and if I’m in a music store and they have a good book selection, I’ll buy a couple.”

Flash forward to the present and the shred virtuoso - famed for his mirror-image double-guitar legato prowess, blazing fast alternating picking and “X-wing-style” quad-neck guitar (which he played with his other ’80s metal band, Nitro, on the video for “Freight Train”) - has a new instrumental solo album out, More Machine Than Man [Rat Pak].

And every step of the the way, it’s that pure, innocent curiosity about music that motivates him.

“When I was a kid, I read that Hendrix could ‘play guitar in every possible position,' so I actually brainstormed and wrote down every possible way I could think of that a guitar could be played,” says Batio.

Presented by by Blue Microphones, this episode of No Guitar Is Safe finds Batio demonstrating one of the playing approaches that may have arisen from that childhood brainstorm - the cool “over/under” fretting technique that finds him rapidly alternating between fretting notes with his hand under or over the neck.

“We used to close shows with ‘Roundabout,’ by Yes, and that song goes on for days,” says Batio. “I used to get bored playing that one E minor riff on the low string over and over, so I started playing it with my fretting hand over the neck, and people were fascinated. They’d come up to me after and say, ‘You’re playing the guitar like it’s a piano!’ The audience encouraged me to keep doing it.”

Being left-handed but playing right-handed, fretting phrases with his left hand over the neck came fairly easily for Batio, and soon the practice evolved into the over/under approach.

“I quickly realized that open strings are your friend when you're doing over/under stuff, because an open note gives your hand a chance to switch,” says Batio.

It’s a showy technique that looks cool even from 100 rows back. “I’m mellow off stage,” says Batio, “but I’ve been on stage since I was ten years old, so I can be flamboyant.”

More Machine Than Man reveals some of Batio’s more recent explorations - 7-string licks and economy picking. “When I want to go from warp speed to trans-warp drive, I start economy picking,” says Batio. “Economy picking just flies. I’m known for being an alternating picker, but I’ve found that as I get older I use them both about equally.”

Whether he’s learning or teaching a new guitar technique, Batio says the best results yield from the classical piano study techniques he learned as a child.

“I emphasize short exercises that focus on exactly what you are trying to learn,” says Batio. “There are a million great lessons out there, and I’m not taking anything away from them, but instead of learning these big long riffs, focus on a small pattern.

"For instance, isolate a short phrase - maybe something like ‘This is economy picking’ - practice that, and take it from there. That’s my methodology. That’s how I learn and how I teach guitar. The big, long riffs will come later.”

You can check out my interview with Batio below.

Stream all 119 episodes of No Guitar Is Safe from your smartphone's Podcasts app, iTunes, Spotify, Google or wherever you get your podcasts.