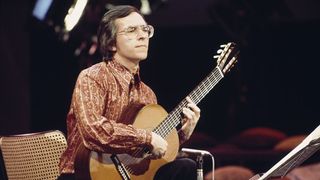 Were you involved in choosing all the pieces for The Ultimate Guitar Collection?
I didn’t initially choose all the pieces. Sony came out with a selection of pieces that get requested from different countries and asked me what I thought. I did actually vet the whole lot very thoroughly. These days, collections of the classical catalog are endless. You have after-dinner classics, before-breakfast classics, moonlight classics, even music for listening to with your pet. But compilations like this one of mine get through to an audience that is perhaps a bit nervous of anything too specialized.

The Ultimate Guitar Collection certainly isn’t too specialized. You’ve got classical guitar pieces, but you’ve also got pop pieces like “The Entertainer,” movie scores, and even a Charlie Byrd blues tune.
That’s right, a lovely little blues. I didn’t choose all those. They were picked by a chap here in London, Alex Cowan, who works at Sony BMG. His basic selection was really pretty good.

You perform pieces on this record from many composers, including Agustin Barrios. Do you have a favorite composer?
I don’t have a favorite composer, I really have to say. Of the guitarist/composers of Latin America I think Barrios is the biggest figure. I would say Leo Brouwer is probably the best composer for guitar of anyone, because of his skills as an orchestrator. But as a guitarist/composer, Barrios is the chief.

How important is it for you to be faithful to the composer’s direction versus interjecting your personality or your interpretation into the piece?
I think with a lot of music there is a question of style—not rules, not things you have to do, but things that are a guide to how the music works best. Take, for example, the main elements of the baroque style when applied to a chaconne: the rhythm, the note values, the so-called double dotting, unequal notes, and so on. Someone could ignore everything that we’ve learned about that period and say, “If it’s me playing it, it’s my right to play it how I like.” Well, there’s no answer to that. Of course people can play anything they like. They’re not going to be put in the electric chair for it. I think a little bit too much guitar teaching is spent on telling people when they’re playing with an individual style as opposed to a social or historical style.

You play a guitar built by Greg Smallman, right?
I do. I got my first Smallman in 1980. I haven’t played other guitars since then. In the last few years, I’ve taken to using a pickup in the bridge for direct amplification as opposed to using a microphone—not when I’m on my own but only when I’m playing with other musicians. I’ve actually now got four Smallmans—two with pickups and two purely acoustic ones. I’ve got a backup in both cases.

What inspired you to use a pickup?
I always think that in the end, technology and experimentation with equipment can deliver the goods. Traditionally, classical guitarists have thought that all kinds of amplification were crude and bastardizing. They thought that it might be sacrilege to stick a pickup in a great guitar like a Smallman. To my mind, it’s on the contrary: If a system is really good, there’s even more reason to have a better guitar for it. I think it just goes to traditional prejudice that somehow it’s corrupting the pure sound and all that.

Segovia wouldn’t use anything—it was just him and the guitar.
I heard Segovia often in London. Once you get past the magic of the great old man walking on the stage and all the history that goes with it, it was ridiculous, to be honest. You’d be sitting in the back of the festival hall and you’d hear the odd little plink and plonk. It was magic but it wasn’t music. It had a great charm and I don’t want to knock it, but it’s not the way that I personally want to communicate music. The guitar is just this fantastically beautiful, wonderful instrument. There’s such a range of sound and color, and the more you can hear it, the better.

What type of pickup do you use?
It’s an amalgam of two systems—a pickup and an internal microphone. The pickup under the bridge is a B-Band, which was recommended to me by Ben Verdery. It’s a really brilliant pickup, but the combination with the microphone inside the guitar is important. It’s a modified AKG, which is on a gooseneck, so it can be adjusted for position slightly. I have a tiny little plug-in box that mixes and blends the two sounds.

What strings do you use?
I use the D’Addario EJ46 Lightly Polished Composites. The crucial thing is the lightly polished. The lack of squeaks with a lightly polished string is just as important for live playing as recording. A lot of people think the squeaks that everyone gets on guitar are a part of the sound and they like it. There’s hardly anything to like about it. They’re totally out of time and they sound like mice squeaking in the corner of the room! The less you can have of that, the better.

Your father began teaching you to play when you were seven. How did you stay motivated to practice?
My father was a brilliant psychologist. He was not a sort to lock you in a cold room and say you’ve got to do an hour’s scales every day. He said, “You’ve really got a talent. I think you could be really good and you should practice some each day. Just do half an hour every day and it will be enough.” So I used to do half an hour’s practice a day, that’s all. He just had to guide me and teach me but he didn’t interfere a lot.

What were you working on?
My father made sure I had a lot of music to read. I used to read my way through a lot of the methods—Aguado, Coste, studies by Sor—and I became quite a good reader. That was good not only for the reading but because it keeps you interested. Instead of playing boring exercises, you’re playing pieces. I believe that even more today. I think a lot of practice is much too regimented and much too based on exercises.

In terms of scales and arpeggios?
Yeah. I think basic scales and arpeggios are fine up to a point, maybe half an hour a day. But I think beyond that, if people practiced the actual pieces of music properly, every piece of music has a hundred exercises in it: legatos, crossing strings, little problems, chord shapes.

How do you see your role as a teacher?
I like it when students explain what they’re trying to do with a piece. Often, people can do something totally different from what I do. It’s interesting for me to see how they describe what they are trying to do and if that convinces the other guitarists listening. I suppose, in many cases, teaching is a kind of catalyst for both the student and the teacher to examine things in a way that they wouldn’t otherwise do. I don’t want to duck my responsibilities, but I like to be more like a chairman of a meeting. I think it’s very good for students to take responsibility for the way they play something and to explain why they do it that way. A lot of students—perversely, strangely, ironically—like the old system. They prefer the authoritarian way of teaching because it absolves them of responsibility. They like to go in and say, “The master’s going to tell me how to do it and I’m going to do it like the master says and I’ll be okay as long as I practice the way he tells me to.” That’s not really what music’s about. Music’s about finding a way of really experiencing that music yourself in a way that you can then transmit to other people. You can’t experience music by simply doing what someone else tells you to do.