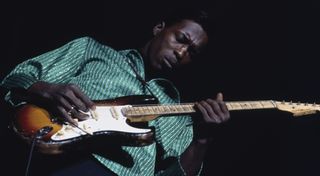 The following is an excerpt from an archival Guitar Player interview with Buddy Guy.

“I learned about showmanship from Guitar Slim,” remembers Buddy Guy. “It was the first time I ever saw a Strat in my life. I paid a dollar and a quarter to see him in Baton Rouge. When they introduced him, I was standing at the bandstand - there weren’t any chairs.

"It was on the second floor at a rented hall called the Temple Roof. The band played for a half hour or so until a voice said, ‘Ladies and gentlemen, Guitar Slim,’ and all I heard was a guitar.

"You know how you put a baby around your neck and put its little legs over your shoulder? A guy brought him in through the crowd like that, and then he bent over and dropped Slim onstage where he sang ‘Done Got Old.’ ‘I want to play like B.B. King,’ I thought, ‘but I’m going to act like Guitar Slim.’

“When I first came to Chicago, I started walking through the crowd with a long wire, and I got that part of my show from Guitar Slim. People love to see you get close. I even let the little kids strike my guitar because they don’t ever forget it. Santana tells me that every time I see him, because somebody called him up at the Fillmore West once. ‘Man, just like me - that kid will never forget it,’ he says.

“I used to lay the guitar down and put my feet on it, or drag it across my butt. I don’t do that anymore. But way back when they used to have guitar battles every Sunday afternoon in Chicago, I won them all because most of the guitar players sat down until I came to town.

“What worked last night may not work tomorrow night with the audience because people are so hard to please. You just have to take each day at a time. You can’t really practice - if I tried to put on my show at the house I’d probably tear up a guitar or something.

"I don’t practice showmanship with the band, because I don’t do the same thing every night. And the timing is different if it’s not your show. I still get stage fright regardless of whether the stage is big or small. I have two shots of Cognac and try whatever comes into my mind when I go out there.

"Showmanship comes down to the individual. Musicians are like athletes. You’re either acrobatic with the guitar or not. That’s just God-gifted talent. Some people got it and some people don’t. Some don’t need it. Eric Clapton and B.B. King don’t need to do anything but sing and play, but Buddy Guy has got to put something else in there.

"I can lay back and play one or two, but it’s not going to get you as happy as if you see me play with all that emotion.

“A lot of people think you have to be the show closer. I hate that. You can’t see the crowd when you are playing big shows with the spotlight on, which is why I like to play outdoors in the summertime. I want to go right in the middle of the day before the sun goes down so I can look all the way in the back to see if somebody is enjoying himself.

"Even if he is not clapping, I can see it in his facial expression. I can tell right then - that note made him frown, or that one moved him. Or when I hit that note it went all the way through him.

“When you leave my show, I at least want you to go away saying, ‘I might not have liked anything he did, but he gave me the best he had.'”