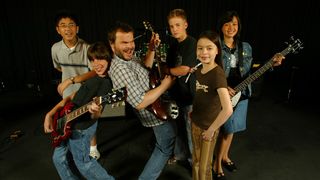 The rather dorky title of the upcoming Ricki and the Flash flick, directed by Jonathan Demme, doesn't diminish the fact that rocker Rick Springfield wields a 1968 Gibson SG in the movie, and Academy Award winner Meryl Streep spent six months actually learning how to play guitar — for real — during filming.

This brings to mind real-life guitar players who actually performed with their guitars on the silver screen—and guitar-strumming actors who honed their six-string skills for a real onscreen performance.

So let's consider 15 big guitar moments in film, where reality existed side by side with movie magic...