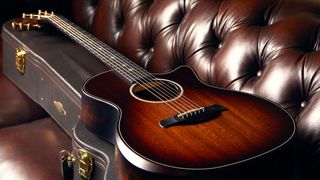 Taylor has partnered up with West Coast Arborists to launch its new Urban Wood initiative, and with it the company's new Builder's Edition 324ce acoustic guitar.

West Coast Arborists (WCA) is a large, California and Arizona-based tree services company that - among a number of other services - helps cities remove trees and recycle the wood from them when the trees have been damaged by weather or begun to ail.

WCA recently invited Taylor to take a look at its inventory of urban wood species, and see if any of them would make the cut as instrument tonewoods. Though Taylor built prototypes with a number of woods that didn't quite work, there was one, shamel ash, that hit the sweet spot.

“This ash species happens to be a great mix of the right weight, density, dimensional stability and drying attributes, and responds well to sawing, sanding and finishing,” Andy Powers, Taylor's master guitar designer, said. “In almost every physical way I can measure it, it’s reminiscent of really good Honduran mahogany.”

Re-dubbed Urban Ash, the wood graces the the back and sides of the new Builder's Edition 324ce, which is also built with a mahogany top.

Elsewhere, the guitar features a chambered body and fretboard edges, a beveled armrest and cutaway, V-Class bracing and a Curve Wing bridge.

The Taylor Builder's Edition 324ce acoustic guitar is available now - with a deluxe hardshell case - for $2,999.

For more info on the guitar, stop by taylorguitars.com.