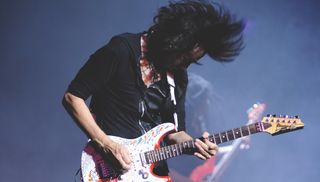 Steve Vai may have celebrated his 60th birthday last month, but the hard-working, boundary-smashing virtuoso certainly isn't slowing down.

Surely, you might be thinking, that must be enough to tide over a man who's already made such a lasting impression on guitar playing. The truth, however, is that Vai has a lot more in the pipeline.

In an interview with Guitar.com, the maestro revealed that he has not one, not two, not three, not four, but five albums in the works.

“My original plan was to record three trio-based instrumental guitar records that have no overdubs,” Vai said.

“There’s also the Real Illusions trilogy," Vai continued. "I’ve already released two records, so I decided that I should do the third one. I’ve started to pull that together.

“On one of my Alien Guitar Secrets, I did an acoustic and vocal version for a song, 'The Moon And I.' The response was so great that I thought, ‘You know what? I’m going to make an acoustic record.’ Just solo acoustic guitar and vocals."

Don't get too excited about seeing all of these projects come to fruition in the near future, however.

“It’s difficult for me to talk about them because my plans change,” Vai said. “Once I let something out that I’m doing, people expect it right away. So I should preface this with, I don’t know what’s going to happen.”

We'll certainly have our eyes, and ears, peeled either way!