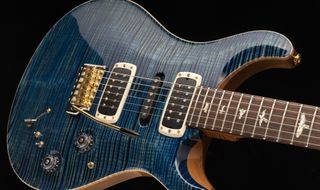 Originally built for the Experience PRS 2020 event, which ended up being held virtually, the Modern Eagle V features a Maple 10 top and a mahogany back, mahogany neck and a 22-fret Honduran rosewood fingerboard with PRS' trademark “Old School” bird inlays.

Pickups-wise, the Modern Eagle V is outfitted with TCI humbuckers at the neck and bridge plus a PRS single coil in the middle position. These are controlled by volume and tone knobs with push/pull and a five-way (treble, treble and middle, middle, middle and bass, bass) selector.

Further controls on the guitar include three mini switches. Two of these separate the slug-side coils and turn the humbuckers into “TCI-tuned” single coils, while a third mini-toggle changes the volume pot value from 500k to 250k for a huge variety of tones.

Other features on the Modern Eagle V include Phase III tuners with faux-bone buttons, hybrid hardware and a PRS Patented Tremolo.

The Experience PRS 2020 Modern Eagle V guitar will be available in two finishes, Charcoal and River Blue, with 200 examples of each finish set to be produced. It will retail for $5,500.

For more info on the guitar, stop by prsguitars.com.