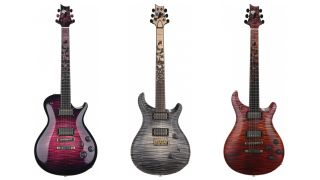 PRS has teamed up with music retail giant Sweetwater to create the Owls in Flight guitar.

Each Owls in Flight guitar features an exclusive Owls in Flight fingerboard inlay with a two-tone color scheme. Each of the guitars also sports a unique perched-owl headstock veneer - crafted from a variety of different, high-quality woods - and a unique “large gibbous moon” on the headstock, made from mother-of-pearl, glow-in-the-dark Luminlay and other materials.

The guitars' eye-catching finishes, according to Sweetwater, were inspired by the texture of owl plumage, lingering sunsets and other scenes from nature.

The Owls in Flight guitars sport custom electronics. Buyers can spec out their own customized design or choose between Sweetwater's pre-built models.

For more info on the guitars, stop by sweetwater.com.