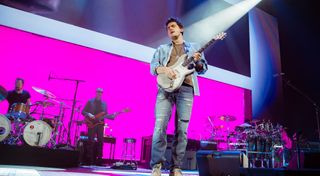 John Mayer, like all of us, has spent quite a bit of time cooped up inside over the last couple of months. Recently, he was motivated to take some of that time to offer an extensive, super-informative guitar lesson.

Posted on Instagram Live (and, helpfully, re-posted on YouTube), the lesson found Mayer discussing a wide range of topics - from why you should play guitar while you watch TV to the benefits of letting singers influence your playing.

Most importantly though, Mayer also offered two super-easy tips players can immediately use to improve their own blues soloing and leads.

You can hear him dish out the tips in the video below, starting at 31:21.

The first of Mayer's tips is simple - start low.

“Leave room for the future of the solo,” he said. “I think as a general rule, you want to move up in pitch during your solos, not down. Because I think there’s a sense of growth in the narrative of a solo when you go higher.

“Jerry Garcia was great at that. I think most great guitar players instinctively understand that if you’re going to solo for a while - Doyle Bramhall II is the master of it.”

The second of Mayer's tips is something he considers the “final frontier” of guitar playing, and a lesson he didn't fully learn until his recent time in Dead & Company.

“You also want to define the key change - and this is something Grateful Dead music taught me,” he continues. “When you’re playing a blues solo, the best soloists are defining the chord change. If you really accentuate the chord change, that is really the final frontier of being a guitar player.

Elsewhere in the video, Mayer talks about his PRS signature model, the Silver Sky, and offers more insights into other musical lessons he's learned during his time in Dead & Company.