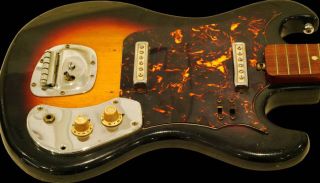 A rare, non-branded early 1960s Japanese sunburst electric guitar once played by Jimi Hendrix has sold at auction for $216,000.

The guitar - according the late guitar legend's brother, Leon Hendrix - was played by Hendrix in the early to mid ‘60s. It was sold by GWS Auctions for over four times its starting bid price of $50,000.

Hendrix is said to have begun playing the instrument “shortly after he returned home from the U.S. Army in 1962.

"After leaving Fort Campbell, Jimi moved to Clarksville, Tennessee for a short time where he played on the Chitlin' Circuit with the likes of Wilson Pickett, Slim Harpo, Sam Cooke, Ike and Tina Turner and Jackie Wilson before moving to Harlem, New York in early 1964 where he stayed until late 1966 playing venues such as Cafe Wha? and the Cheetah Club.

“Jimi moved to London in late 1966 and left this guitar in New York at the apartment of one of his best friends, where Leon [Hendrix] recalled seeing it many years later.”

The guitar - which came without strings - was offered with a letter of provenance from Leon Hendrix.

For more info on the guitar, stop by gwsauctions.com.