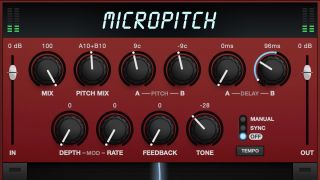 The latest of the company's H9 series plug-ins, the MicroPitch is a pitch shifter that provides effects ranging from "subtle tone fattening to dramatic slap-back effects via longer delays."

Control-wise, tone, pitch mix, mod depth, rate and feedback are adjustable, while presets based on classic MicroPitch sounds (the effect dates back to the '70s) are also available.

The plug-in's Ribbon function allows users to “play” an effect in real time, and offers them the ability to morph back and forth between settings of their choice.

Desktop users can plug in a MIDI keyboard and control the Ribbon via a mod wheel, while the plug-in also supports VST, AAX and AU plugin protocols for compatibility with DAWs.

The Eventide MicroPitch Dual Voice Pitch Shifter plug-in is available now at a special discount of $39 until May 31. After that the plug-in will be available for $99.

For more info on the plug-in, stop by eventideaudio.com.