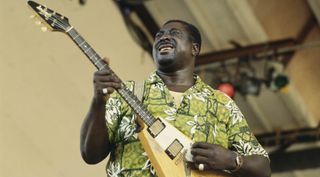 In the blues - music that, according to Willie Dixon, “tells the truth” - it’s advisable to start with blue notes as opposed to blues notes. The order truly distinguishes the “real deal” of the blues from other forms of music.

As America’s most original art form, the blues results from the glorious commingling of African and Anglo influences. It’s an oversimplification to say that its basic harmony (I–IV–V) comes from Europe and its melody (the blues scale) from Africa, but that’s a start.

The blues scale - perhaps derived from Middle Eastern pentatonic scales, and shown in Figure 1 - appeared initially in the field hollers of slaves. Prominent in this scale are the “blues notes”: the b3rd (Bb), b7th (F) and b5th (Db) [Figure 1B]. These notes give the scale a distinctive dissonance, particularly when played against major chords.

When emancipated blacks switched from banjo to guitar after the Civil War, they eventually began to imitate bluesy vocal swoops by bending the strings. Pioneering blues guitarists became focused on the b3rd and b7th notes [Figure 1C], which they idiosyncratically bent the microtone of a quarter step.

These “true blue notes” are located in between the b3rd and major 3rd, and between the b7th and major 7th, respectively, and help to produce the profound sound of the blues.

Here we have a few classic licks that feature blue notes. In Figure 2, the bent b3rd (Bb) resolves to the root (G) in measure 1, whereas the bent b7th (F) in measure 2 hangs suspended, creating vibrant musical tension and anticipation. Most blues cats pull down on the b3rd with their index finger and bend the b7th up with their ring finger or pinkie.

In the mid Sixties, master string-bender Albert King regularly squeezed out tart licks similar to the ones in Figure 3.

Again, the bent b3rd resolves to the root, though placing the root up an octave, on beat 1 of measure 1, gives a feeling of uplift, not finality. The bending of the b3rd on the high E string, followed in measure 2 with resolution to the root on the B string, is an oft-imitated King trademark.

Trains figure both lyrically and musically in the blues, and blues guitarists often emulate steam whistles. Dyads like those in Figure 5 - found in Robert Johnson’s “Sweet Home Chicago” - enable this effect. As usual, both the bent b7th and bent b3rd (last half of measure 1) resolve to the root (measure 2).