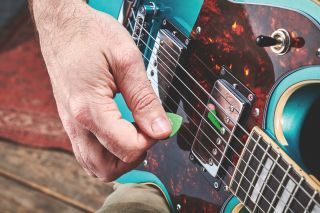 Ah, the minor pentatonic scale - most likely the first scale you learned to play. Even if it wasn’t, those five notes are probably so ingrained in your head and fingers by now that they might as well be members of your family.

For rock guitarists in particular, this is a good thing, since the minor pentatonic is arguably the fundamental rock scale, an essential component of riffing and soloing in every strain and subgenre of the music for more than 60 years.

But just as certain people in your actual family can sometimes be terrible bores, so the five members of the minor pentatonic can become tiresome, always following the same patterns and never seeming to change their mood.

Fortunately, a solution is at hand. You can alter the way you approach the minor pentatonic.

First, remind yourself that each minor pentatonic scale has five different “box” positions on the guitar. It’s common for players to lean on one or two (usually the ones that fall in line with the most typical barre voicings of the tonic chord, rooted on either the E or A string) and get stuck in a rut.

Second, break out of scalar routine: skip strings, arpeggiate - whatever it takes to get away from playing the notes in the order everyone expects.

Third, change up your left- and right-hand attack with bends, slides, pick rakes and so on.

The following examples - each using a different box position of A minor pentatonic and nodding to the style of a different guitarist - will help you in all three areas.

Figure 1 starts out with a pull-off lick made famous by Jimmy Page during Led Zeppelin’s late-Sixties salad days, but the slides that close out each measure take us somewhere considerably funkier.

Although the fretted notes all belong to the 2nd-position form of A minor pentatonic, the open strings make this figure a hybrid in terms of hand placement. If you like, you can stay more within the standard box by fretting the G and D (on the 4th and 5th strings, respectively) instead of letting them ring open, but you’ve got no such choice with the open E unless you detune your bottom string.

Experiment with how you finger the sliding notes. Playing them with your second finger will put you right back in position at the end of measure 1.

For this lick, you’ll get the most appropriate tone out of a Telecaster or similar electric guitar loaded with single-coil pickups and plugged into a small combo. Keep the overdrive subtle.

Each section of the line traces around a core note (first A, then E, then C), which creates a cascading effect. The central conceit here is that the guitar part briefly implies a 6/8 time signature over the rhythm section’s steady 4/4. This kind of rhythmic superimposition is a great way to break out of that old minor-pentatonic deadlock.

It’s purely a matter of personal taste which notes you pick here and which you hammer on and pull off. Try it your own way.

Tone-wise, use the same setup as in the last figure, but crank the gain.

With Figure 3, we move up the neck into 7th position and enter the realm of string skipping.

Intervallic leaps are the norm here, since nearly every note is played on a string that’s not adjacent to the one on which the previous note was played. The result is an angular riff reminiscent of Robert Fripp’s work with King Crimson in the early Eighties. Note how the first four notes of bar 2 spell out an A7sus4 arpeggio.

There’s no way to play this properly without a finger stretch. The easiest approach is to play the 4th-string, 10th-fret C notes with your third finger.

Tone-wise, any type of electric guitar will suit this one. The tone is clean, and you might want to try stomping on a chorus pedal. If you’ve got a Roland JC-120 amp, all the better.

Figure 4 takes us to 9th position with a blues-rock passage out of the Peter Green playbook.

Hammer-ons and pull-offs organized around a repeated rhythmic motif (two 16th notes tied to an eighth note) generate formidable momentum, leading up to the payoff in the last bar - a quarter-note bend and a nasty downward run punctuated with serious vibrato. For further reference, check out Fleetwood Mac’s Then Play On.

This one falls squarely in the Les Paul zone, but any humbucker-equipped ax will do the trick. It requires some dirt, but should still sound smooth. The neck pickup is recommended.

Eric Clapton’s early tenure in John Mayall’s Blues Breakers produced many a lick like Figure 5. Another arpeggio, this one an A minor shape in 12th position, precedes a dramatic pick rake and whole-step bend. The notes are simple - it’s all in how you play them.

The two notes at the beginning of measure 2 are ghost notes. Rake across them quickly with your pick as you head for the 12th-fret E.

Tone-wise, this is the same as the last figure, but use extra grit, enough to make you feel the sizzle between the notes while still hearing each distinctly.