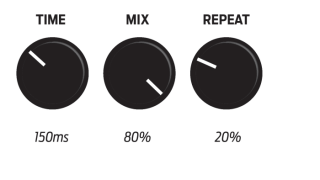 No matter what the weather was outside, my grandmother usually kept the heat on. Similarly, no matter what the gig is, I usually keep some sort of a delay pedal on. I don’t know if it’s hereditary, but I do know that stompbox and rackmount delays are by far my favorite guitar toys. As an instructor in NYC Guitar School’s Rock Band program, I’ve realized that delay is perhaps the most misunderstood, misused, and underexplored stompbox on many students’ boards. Hopefully this little treatise will demystify newbs while teaching old dawgs a few tricks.

Like its name suggests, a delay pedal is a device that delays playback of your guitar signal. This delayed sound is often referred to as the “wet” signal while the original guitar tone is known as the “dry” signal. You play a note (dry) and the delay plays back an echo of the note (wet).

Most devices offer control over three main parameters of the wet signal and different manufacturers may call them different things. Understanding these parameters is imperative to understanding how delays work though, so pay close attention:

1. The Time or Rate control sets the amount of time between the sounding of the initial dry signal and the device-generated wet signal. It’s usually measured in milliseconds (ms) and the most commonly used delay settings lie in the 50-600ms range. To keep things simple, let’s quantify delay ranges as short (0-200ms), medium (200-400ms), and long (400ms and beyond).

2. The Mix or Depth knob—sometimes labeled simply Delay—controls the volume of the wet signal in contrast to the dry signal. For example, a Mix knob set halfway would play back the delayed note half as loud as the original note.

3. The Repeat, Feedback, or Regeneration knob governs the number of times the delayed signal is repeated back. Generally each successive playback decreases in volume.

I like to think of delay as having two main uses: compositional and environmental. Let’s first explore environmental delay by electronically simulating naturally occurring echo-producing environments.

If you’ve ever walked into an empty, carpet-less, curtain-less apartment and heard your words rapidly echo back at you, you’ve experienced slapback delay. Slapback delay creates a retro, vibe-y ambience that can add immediate depth to guitar parts. To dial in the slapback, just analyze the science behind the sound. The echo reverberates back at you almost instantly, so set a short time of approximately 150ms. The echoed sound is almost as loud as the original sound since it doesn’t have very far to travel. Set your Mix at around 60-80 percent. The echoed repeat happens once, so set your Repeat knob between 0 and 20 percent.

We can use this same reverse-engineering process to make a signal sound like it’s echoing in a giant cathedral or through a mountain pass. Since the echoed signal has longer to travel before it bounces back, set the delay time longer (350-700ms). The echoed signal will be softer than the original so set the Mix between 20-40 percent. Also there will be several repeated echoes so set the Repeat at 50-75 percent. Of course these numbers are ballpark figures and will vary from unit to unit, but the basic approach will remain consistent so feel free to use Fig. 2 as a starting point for exploring long delay settings.

Using a delay to sweeten your sound is rad, but actually incorporating delay-generated notes as part of a musical composition is where we make a quantum leap in coolness. In order to use echoed notes compositionally, you have to set them to play in time with the music. Setting delay time is a factor of both tempo and what rhythmic value you’d like to generate. There are 60,000 milliseconds in a minute. If our tempo is 100 bpm (beats per minute) then 60,000 divided by 100 would mean we would need to set the delay time to 600ms in order to generate quarter-notes.

Sound a bit confusing? It can be. In the interest of full disclosure, I never learned rhythmic delay with a calculator; it was shown to me by the owner of my local music store and I was able to just suss it out by feel.

Nowadays, many digital delay units are equipped with a Tap Tempo feature. This allows you to choose the rhythmic subdivision (quarter-note, eighth-note, dotted-eighth note, etc.) via a knob or mini-toggle then use the tap tempo button (or occasionally an external pedal) to “tap” in the tempo you’re playing at with your foot. Essentially, it does the math for you. Let’s explore some compositional uses of different delay-generated note values. For the sake of consistency, we’ll stick to a tempo of 100bpm.

To regenerate quarter-notes, set your Time to 600ms, your Mix between 80-100 percent and your Repeat to three. Drawing inspiration from U2’s “A Day Without Me” and portions of Jimmy Page’s live guitar solo in “Dazed and Confused,” Ex. 1 shows how quarter-note delay makes a single chord hit electronically surge throughout a measure for cool trippy effect. Another spiffy quarter-note delay ploy shown in in Ex. 2 involves playing a four-note sequence up a major scale starting each consecutive sequence a third higher. When the delay regenerates the previous sequence, you’ve automatically created a harmony line in thirds!

For a groovy swing feel, set your delay Time to 400ms, your Mix at 80-100 percent, and your Repeat to one regeneration, so the delayed note hits the last triplet of a beat. It’s essentially the same rhythm as swung eighth-notes where we sound the first and third notes of an eighth-note triplet. Listen to Roger Waters’ thumping bass line on Pink Floyd’s “One of These Days” to get the sound down. Then play Ex. 3’s boogie-woogie-style rockabilly rave.

The Grand Poobah of all rhythmic delay, the dotted-eight note setting (sometimes referred to as 3/16 note delay) can be found at 450ms for a 100bpm song. Dotted-eighth delay sets the repeat to land on the last sixteenth-note of the beat, and can essentially make a scale played in eighth-notes sound like a melodic sequence of sixteenth-notes. This setting is most often associated with U2 guitarist The Edge, and is the magic behind the sparkling riffs of “Where the Streets Have No Name,” “Pride (In the Name of Love),” “I Still Haven’t Found What I’m Looking For,” and many others.

As demonstrated by Ex. 4, a major scale played with dotted-eighth-note delay gets digitally transformed into a Hanon-approved cornucopia of sixteenth-notes.

Mastering tried-and-true delay techniques is a worthwhile and useful endeavor and can certainly enhance your sound. Once you have the basics down, the possible uses for delay are only limited by your imagination. Most digital delays offer a “stereo out” option. This allows you to send the dry signal to one amp and the wet signal to another for a “ping-pong” stereo effect. You can get creative by adding additional signal processing between the wet signal out and the amp input. In Fig. 3, I’m using an octave pedal set to modulate one octave higher.

Ex. 5 is the ear-bending result: a cool phrase generated by using the wet signal of a quarter-note delay (600ms) to regenerate the octave jumps on the eighth-notes and power chords.