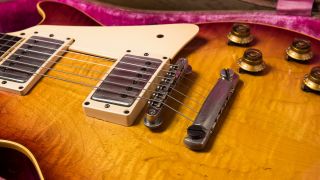 When it comes to tonewoods used in the construction of guitars, there are many points that need to be considered.

For instance, the body and neck both contribute to the sound, and luthiers achieve certain tonal goals by carefully matching body and neck woods. Furthermore, these components can be of single- or multi-wood construction.

Bear in mind that woods of the same species cut from different trees (or grown in different regions) will sound slightly different, and have different weights, different densities, and so on. So the sonic variables exist not only between woods, but, in subtler degrees, between different guitars made from the “same” wood—which is part of the magic in searching for your dream guitar amid ten of the same model hanging on the guitar store wall.

Please note that in this “All About” we’re talking about tonewoods in solidbody and semi-acoustic electrics. The properties of woods used in acoustic guitars will be tackled in another issue.

As with ash, it’s impossible to discuss alder without making reference to Fender, which first used alder prominently in the late ’50s and early ’60s. It’s a medium-weight wood, although quality cuts of alder used for guitar bodies will often weigh less than denser cuts of ash.

Alder has a strong, clear, full-bodied sound, with beefy mids and excellent lows. Its highs sizzle slightly, but are rarely harsh, and it offers a decent amount of sustain. Slightly brownish in its natural, dried state, alder’s grain isn’t necessarily unattractive, but it usually isn’t particularly interesting, either. It is typically used under opaque finishes, but some examples can look good under darker translucent finishes. Like ash, alder is most often used on its own as a body wood.

Best known as the wood of classic ’50s Fender guitars, ash is most desirable in the form of swamp ash—wood taken from the lower portions of southern-grown wetland trees that have root systems growing below water level. Good swamp ash is both light and resonant, and generally carries a broad grain that looks great under a translucent finish.

Ash from the upper portions of the tree has also been used, as has harder northern ash. Both tend to be denser and heavier, and have a brighter, harder sound that might be more useful when cutting, distorted tones are desired.

Ash is traditionally used for single-wood, slab-bodied guitars, but has sometimes been employed by more contemporary designers in multi-wood (or laminated) bodies—most commonly with a carved-maple top, or as the top of a semi-hollow or chambered guitar with a back made from a different wood.

Affordable and abundant, basswood is particularly associated with mid-level or budget guitars. But basswood is a good tonewood by any standards, and it has been used by many high-end makers with excellent results. It is a very light and fairly soft wood, and it’s light in color, too, with minimal grain.

Solid basswood bodies have a fat, but well-balanced tonality. There’s a muscular midrange, but also a certain softness and breathiness. On a well-made guitar, basswood can yield good dynamics and definition with enough grind to give the sound some oomph.

Best known as the tonewood of Gibson’s radical Modernistic Series of the late 1950s—the flashy Flying V and Explorer—as well as more recent guitars that follow these templates, Korina is a warm, resonant, and balanced performer. It also yields great clarity, definition, and sustain.

The species is known generically as limba—an African wood related to mahogany, but imported under the trade name Korina. It’s a fairly light hardwood with a fine grain that’s usually enhanced in the finishing process to appear as an attractive array of long, thin streaks. White limba—as used by Gibson and Hamer—has a light appearance in its natural state, and black limba has a more pronounced grain.

Alongside maple, mahogany is a classic ingredient in both slab and multi-wood (or laminated) bodies, and is a common neck wood, too. It’s also used in single-wood bodies. As for the classics, the Gibson Les Paul Jr., Les Paul Special, and SG were made of solid mahogany (with mahogany necks), and countless makers have used the wood in both solid and semi-solid designs over the years.

Harvested in Africa and Central America, mahogany is a fairly dense, medium-to-heavy wood that yields a wide range of guitar-body weights, depending upon stock sources. Used on its own, mahogany’s characteristic tone is warm and somewhat soft, but well balanced with good grind and bite. There is usually good depth to the sound, with full but not especially tight lows, and appealing if unpronounced highs.

Used for both bodies and necks, maple is a dense, hard, and heavy wood, sourced mostly in the Northeast and Northwest United States and Canada. Maple is often used as an ingredient in a multi-wood body, where it is generally partnered with a second, lighter wood.

All-maple bodies aren’t unheard of—although the weight is usually off-putting—and, on its own, a maple body produces an extremely bright, precise tone with tight lows. This light-colored wood with a tightly packed grain doesn’t always carry dramatic figuring, but some examples can be spectacular, as most famously seen beneath the sunburst finish on the carved-maple tops of some Gibson Les Pauls from the late 1950s.

Maple is also one of the most common ingredients of laminates used for semi-hollow electric-guitar bodies, where it contributes tightness and clarity.

This is the most popular laminated body type of all time. Adding a solid maple top to a solid mahogany back yields a guitar body that exhibits many of the best tonal properties of both woods. The solid maple/mahogany body is characteristically rich, warm, and resonant. You get mahogany’s smooth, appealing lows with good sustain, as well as the extra clarity, definition, and bite added by the dense maple cap.

A “hardwood” by definition, poplar is actually relatively soft when compared with a range of hardwoods. It is now surfacing more and more as a body wood used in affordable, Asian-made electrics, and it displays a rather bland, characterless quality. Although well-balanced sonically, poplar bodies aren’t particularly resonant or sustaining, and they generally don’t seem to enhance any particular frequency range or overtones.

This highly prized tonewood is seen frequently in fretboards, and in the backs and sides of many quality flat-top acoustics, but rarely in solidbody electrics.

One notable exception was the Rosewood Telecaster that Fender produced sporadically between 1969 and 1972 and was played by George Harrison. Rosewood makes for a very heavy and overly bright-sounding guitar—and an expensive one, too—that is typically more of interest for looks and novelty factor than for tone.

Dense and fairly heavy, with sonic characteristics similar to those of mahogany, walnut is occasionally used in electric-guitar bodies. It tends to be warm and full, but usually with a firmer low end, and more overall tightness. Walnut’s rich brown color and often pleasing grain patterns means it looks good under a simple coat of translucent lacquer.

Woods such as purple heart, wenge, koa, bubinga, and muira piranga are used by custom guitar-makers, but don’t feature highly in mass-production guitars. These are mostly hard, dense woods with distinctive grain patterns. The colors can be appealing in their natural states, and they are usually used as one ingredient of many in a multi-wood body.

Spruce and cedar—the two most common woods for the tops of acoustic guitars—will very rarely come into the picture regarding electric-guitar construction, although makers have occasionally offered semi-hollow electrics with thin spruce tops.

A popular upmarket pairing, the ebony fretboard contributes to a little more tightness, clarity, and definition, as compared to the mahogany/rosewood neck. A very dense, hard wood, ebony makes for a fast attack from the instrument—all else being equal—and it offers a muscular, controlled bass, and snappy, sizzling highs.

With a mahogany back contributing some warmth and openness to the brew, this can be a very appealing pairing. Ebony also wears very well, and it doesn’t divot under years of finger-and-string pressure nearly as easily as rosewood does.

The second most common guitar-neck wood after maple, mahogany is most often coupled with a solid mahogany or mahogany/maple-topped body. This more porous, open wood doesn’t quite have maple’s hardness, strength, or stability, however, and it isn’t suitable as a fretboard material.

Mahogany has a warm, mellow tone with good presence in the lower mids. The mahogany/rosewood pairing contributes to complex highs, thick and creamy lows, and an appealing midrange that isn’t honky or excessively punchy.

Whether in the form of a solid, one-piece neck with integral fretboard, or a neck with an added fretboard of a second type of wood (usually rosewood), maple is easily the most common type of neck wood used in solidbody guitars.

A one-piece, solid maple neck contributes tightness and cut to a guitar, with an edge of sizzle in the highs, and firm lows. Its high end is usually not as over-pronounced as people might think, although it is a characteristically bright neck-wood choice. Mids tend to have a snappy attack, with a punchy, slightly gnarly edge when the strings are hit hard, but excellent clarity with light to medium picking.

Something of a cross between ebony and rosewood tone-wise, pau ferro is a fairly hard, dense, tight-grained wood. It offers excellent clarity and definition, but has more complex highs than maple, with chunky lows, muscular lower-mids, and an airy, open midrange.

Add a rosewood fretboard, and a maple neck’s tonal character becomes a little warmer and sweeter, with more sparkle in the highs and thicker lows (tending towards looser). Also, the mids tend to have a little more openness.

In simple terms, rosewood’s contribution to a maple neck smooths and “furs up” the solid-maple sound. Note also that a player’s choice of an all-maple or maple/rosewood neck might come down to feel (or even appearance) as much as sound.