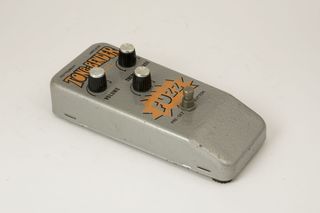 Fuzz pedals stormed the stompbox scene in the mid to late ’60s, and many of them went on to become sought-after classics.

For fans of the aggressive germanium fuzz tones that could be wrought from those early units, there’s nothing quite like the Sola Sound Tone Bender and its many variations offered by companies like Marshall, Vox, Carlsbro and Park, to name a few.

The Tone Bender’s circuit became massively popular, and over the following years its design rapidly evolved, making for a tangled and winding history that is intertwined with some of the most formative music made in the U.K. from the mid 1960s to the early ’70s.

The pedal itself was the brainchild of brothers Larry and Joe Macari, proprietors of the fabled Macari’s Musical Exchange on Denmark St. in London’s Soho district. The Exchange opened in 1958 in the former premises of the Jennings Vox shop in London’s West End.

Notably, Macari’s is still in existence, having recently moved from 92-94 Charing Cross Road to Haywards Heath, Sussex, a short train ride out of London.

The Macaris had noticed the soaring popularity of the Maestro FZ-1 Fuzz-Tone, the first commercially available distortion pedal, when it debuted in 1964. Hoping to tap into its success, in 1965 they commissioned former Vox amp tech Gary Hurst to create a version for them.

The Marshall SupaFuzz was used by the likes of Pete Townshend and featured the MkII Tone Bender circuit.

The MkII Tone Bender circuit. DIY pedal builders, have at it!

Reputedly, London studio guitarist Vic Flick, the man behind the fabled riff in the James Bond theme tune, had given Hurst a look at his Maestro Fuzz-Tone, from which the tech created his own variation. Hurst’s slightly modified three-transistor circuit ran on nine volts, rather than three like the FZ-1, making its distortion louder, aggressive and more sustaining.

It ended up in the first 100 or so units Hurst built, which he housed in angled wooden boxes with no visible brand name. Eventually, the Macaris sold the pedal as the Tone Bender under the brand name Sola Sound, with the wooden box giving way to a folded-steel enclosure.

In early 1966, the Tone Bender underwent the first of many changes when the Macaris, looking to simplify their circuit, equipped it with just two transistors and housed it in a sleek sand-cast metal enclosure.

The Park Fuzz Sound has been cloned by the likes of EarthQuaker Devices who teamed up with Park Amplifiers to bring its germanium fuzz magic to a new generation.

This Mk1.5 version was less gnarly sounding, and just a few months later, they upgraded the Tone Bender circuit with three Mullard OC75 germanium transistors in an extremely simple circuit. Like the Mk1, it featured just two knobs, for volume and fuzz, although the latter received different names on different enclosures.

By this point, the Tone Bender had taken off. Jimmy Page and Jeff Beck both played these fuzzes prominently with the Yardbirds. Page, who used a MkII, continued to slather Tone Bender fuzz all over his early recordings with Led Zeppelin, while Beck, an early Tone Bender adoptee, went on to use the effect on many post-Yardbirds adventures.

As the Tone Bender’s popularity grew, the Macaris began packaging the effect for other brands. Vox sold rehoused Tone Benders as their own before producing an in-house version in Italy. (The Beatles were among those who used the Vox pedal.) Marshall, meanwhile, packed an MkII Tone Bender circuit into its own distinctive sand-cast metal housing as the SupaFuzz, a favorite of many fuzz fans.

The SupaFuzz shown here is owned by British guitarist James Stevenson, a serious fuzz fan and Tone Bender collector who has played with Chelsea, Gene Loves Jezebel, the Alarm, the Cult and other acts. This SupaFuzz packs all the raw, ripped-Velcro goodness that players love about the sought-after MkII Tone Bender.

“I’ve always loved Tone Benders for their no-holds-barred, no-excuses, out-and-out fuzz,” Stevenson says. “One click of that switch and you’re in a whole other dimension - pure, unadulterated rock and roll!”

The Tone Bender circuit gained a tone control (often labeled treble-bass) with the MkIII and continued to receive further circuit alterations right up to the so-called MkVI versions of the ’70s. Meanwhile, the Macaris went on supplying circuits to other brands, including Rotosound, Carlsbro, Park, CSL and Barnes & Mullins.

The brothers had themselves introduced the brand name Colorsound in the late ’60s, with the thought that each type of effect could be housed in a different-colored enclosure. The Colorsound Tone Bender received a silver box with orange lettering, much like the MkIII Sola Sound version.

The MkV was the last update to the Macaris' design before they were built under the Colorsound brand.

Of the various pedals based on the Tone Bender circuit, Stevenson expresses a fondness for the MkV, the last of the Macaris’ renditions before the change to the Colorsound brand.

“The final Sola version, the Mark V, is a great piece of design by any standards,” he says. “It has a dazzling yellow case with Tonebender and Fuzz in psychedelic scrawl, and the legend ‘Hit It!’ by the on/off switch. Great stuff!”