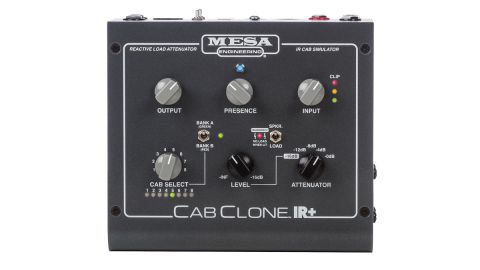 As of late, many manufacturers have turned their attention to creating load boxes that feature onboard cab-sim impulse response (IR) files that replicate the sounds of various speaker cabinets. We’ve reviewed several here, including Universal Audio’s OX Amp Top Box, the Suhr Reactive Load IR, and offerings from Two Notes and Audient.

For several years, Mesa Engineering has put its wealth of experience into the CabClone, which offers analog cabinet simulations. The new CabClone IR+ steps up to the power, versatility and realism of high-quality digital IR simulations, while the “+” adds an output attenuator that lets you reduce your amp’s output to a traditional cab for live use and simultaneously send a signal to the IR stage for front-of-house or recording. Both the attenuator and the reactive load will handle amps up to 150 watts, and a standard CabClone IR is available at $599 with the reactive load but no attenuator.

Even a quick perusal of the CabClone IR+ shows that it offers a surprising amount of functionality and versatility for its deceptively compact size, and on the surface, at least, it appears primed to compete with the best of the units name-checked above.

The main top-panel functions include controls for output (IR level), presence, and input (with LED clip meter); an eight-position cab-select rotary that taps two banks, A and B, for a total of 16 onboard cab IRs; and an attenuator switch with five click positions that go from 0 dB (bypass) to -16 dB in 4-dB increments and then down to whisper quiet via a rotary dial. Another mini toggle on top selects between speaker (attenuator) and load, the latter for use with no cab connected.

Rear-panel connections include jacks for the input from your amp’s speaker out, a line input, an output to a traditional guitar speaker cab (necessary when the top-panel toggle is in the attenuator position), a dry output, an XLR IR output, a headphone output, a USB connection, MIDI in and thru, and an input for the included 18-volt DC power adaptor.

Two mini toggle switches allow you to reverse the phase and lift the ground of the XLR IR output to avoid hum and phasing issues between amp, board, cab and IR. In other words, there are a lot of features, and it’s all built into a rugged steel box that measures 7.5 x 6.6 x 4.5 inches and weighs a squidge over four pounds, with feet tall enough to stand astride the handle on most amp tops.

It’s worth noting again that the IR output is still active in attenuator mode, so you can get whatever cab sound you want at the FOH despite what you’re monitoring through on stage and dispense with cab-miking in the process. Be aware, though, that the attenuator setting does affect the IR output level at the XLR, so you might need to adjust the output level control accordingly. (Mesa’s Doug West tells us they tried tapping the IR signal both before and after the attenuator, and it simply sounds better after, so that’s how it stayed.)

The USB allows you to connect to your computer to access the files stored in both cab banks, as well as a cab library to save your alternates. The unit comes loaded with eight popular Mesa/Boogie cabs equipped with Celestion and Jensen speakers, miked for optimal live (bank A) and studio (bank B) use, for 16 presets in all. Appropriate third-party IR WAV files can be loaded in, and your favorites stored onboard in the cab library folder (the manual explains the process, and it’s extremely easy to do).

I tested the Cab Clone IR+ with a Friedman Small Box head, a Mesa/Boogie Mark V:35 head and a Carr Lincoln combo, both with and without live cabs attached for attenuator function, and via a Universal Audio Apollo Twin Duo recording interface into Pro Tools and routed to studio monitors. Long story short, the Cab Clone IR+ delivers big time and is very easy to use.

Before firing up my Pro Tools rig, I ran the Friedman head via the Cab Clone IR+ into a 2x12 cab with Celestion G12M Creambacks to check the attenuator function, and I was extremely impressed with the sound and feel. All attenuators will impact your overall tone and playing feel at least slightly — just as reducing the volume in the room will in itself induce different sonic perceptions — but this one resulted in far less of that “blanket over your cab” and the perceived dulling of the playing feel than many I’ve tried, and ultimately sounded and felt great at the -4 dB and -8 dB settings in particular.

As an IR unit into the recording interface, the IR+ also performed superbly and sounded great, easily the equal of any other I’ve tried, and with an appealingly realistic feel and response when set to full reactive load with no cab connected.

The Mesa cabs included sound fine and provide plenty of variety, and options like the 4x12 Recto variants are likely to prove popular with rockers in particular. But loading in a few of my personal favorite third-party IRs was also a doddle (including OwnHammer IRs of vintage Marshall cabs with Greenbacks, and Vox cabs with Alnico Blues and Silvers — something the unit doesn’t include otherwise), and I was extremely pleased with the sounds recorded to a few sample tracks alongside tracking I’d done with other IR-based products.

I didn’t do much with the MIDI capabilities, given the space allowed here, but syncing this unit to a switching rig to bring up favored cab presets for clean, crunch and lead modes in your amp is also a big bonus.

All in all, the folks at Mesa Engineering have done a great job here, and while some players might like to have seen a direct-to-digital recording out or some form of cabinet editing software, the Cab Clone IR+ sounds superb without them. I found the recorded sound via the analog XLR output (something lacking from many rivals’ units, which have only ¼-inch TRS) good enough for any requirements. It’s both a great live and recording tool, and another Editors’ Pick Award for the Boogie team.