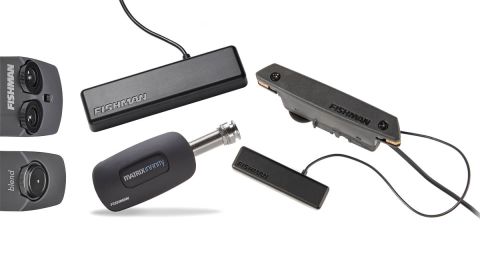 The PowerTap system's sensor finds a happy medium between a pickup's response and a mic, and both systems deliver an alive, musically rich and feedback-free performance.

Fishman is renowned for creating fine acoustic-electric sounds, but its greatest asset may be listening. Recognizing how modern acoustic guitarists are increasingly incorporating percussive playing into their styles, Fishman has answered the call for more guitar-body response with its Acoustic PowerTap series.

The line consists of two dual-element formats: the PowerTap Earth and PowerTap Infinity. Both feature the new Tap soundboard body sensor that affixes to the bridgeplate, and they include a stereo adaptor to split the signals from the pickup and sensor.

Fishman sent a PRS SE AX20E equipped with the PowerTap Earth and a Guild OM-150CE bearing the PowerTap Infinity. I put each through extensive tests using acoustic and electric rigs.

In the Fishman systems, the Tap sensor takes the place of an internal microphone, which is traditionally used in dual-element systems. My first question was, “Does the Tap deliver enough mic-like qualities in addition to its function as a body sensor?”

The answer is a resounding yes. It sounds like a cross between a pickup and a microphone, revealing vivaciousness, dimensionality and depth.

Of course, Tap doesn’t have the openness and sensitivity of a cranked-up mic signal, particularly when tapping on the sides, rather than the top, but it presents its dimensionality without the primary downfalls that affect mic performance, including feedback and tinny sound quality. As for which PowerTap system is right for you, read on.

The two primary reasons to choose a magnetic soundhole pickup are that you dig the sonic quality, either direct or through an acoustic rig, or you want to feed it through an electric rig, because pedals and amps are designed to receive such a signal.

I’m in the latter camp and feel that every acoustic-and-electric player should consider a magnetic soundhole pickup. After all, why not take advantage of your electric rig when you switch to an acoustic guitar for a few tunes?

The Rare Earth humbucker is a cool magnetic pickup because its active electronics provide the hefty signal strength of a powerful passive pickup, such as the Fishman Blackstack or the venerable Sunrise, but without being as heavy and obtrusive.

Power comes courtesy of a single three-volt lithium or two 1.5-volt silver-oxide batteries tucked discretely under the pickup’s belly. The Rare Earth pickup features a flywheel blend control to dial in the desired amount of Tap.

The body sensor is peppy, whether sending a summed signal to a single acoustic amp input, utilizing both inputs of a dual-input amp, such as the Fishman Loudbox, or taking advantage of an electric rig that is split off in complement. And that’s where I really get off in this scenario.

Dial up a down-and-dirty tone from the electric rig, mix in the Tap signal from the acoustic amp, and blend just a touch of Tap with the humbucker feeding into an electric amp. You’ll feel like Sammy Hagar having the best of both worlds.

This is an outrageously responsive acoustic pickup system that delivers consistent functionality whether you split the signal in stereo or sum it to mono. All the controls are housed in redesigned sealed enclosures; the volume and tone flywheels are under the upper lip of the soundhole, and a single thumbwheel blend control is under the lower lip.

A voicing switch located between the volume and tone controls offers a bass boost or a flatter response. Solderless connections make installation easy, and the system runs on a nine-volt battery housed in a soft pack.

Fishman updated its venerable Matrix Infinity pickup-and-preamp system in 2018 to optimize it for modern acoustic amplification, so it sounds fab by itself. The Matrix undersaddle pickup is available in a variety of sizes and styles, and the Infinity is the endpin preamp.

Blend in the Tap sensor, and the acoustic guitar comes alive in your hands. Split the signal into dual channels of an acoustic amp or a P.A., manipulate effects and EQ on either side to your heart’s desire, and bask in the heavenly results.

The peace of mind that comes from playing aggressively and percussively without fear of compression or feedback is priceless. I was originally interested in the PowerTap Earth system, primarily because of the tonal flexibility that comes from splitting signals to acoustic and electric rigs.

I tested it first and was thrilled with its performance. But after feeling the pure acoustic liveliness of the PowerTap Infinity, I became obsessed with both systems.

Hey, Fishman, can you please put them together in a three-way system so we can have the ultimate combination of a pure, percussive acoustic tone and a badass acoustic-electric tone, without having to customize? Until then, both editions earn Editors’ Pick awards