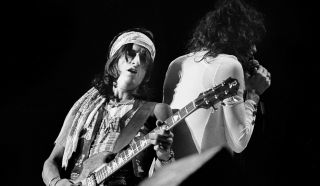 It's not exactly a controversy on the level of Brian Williams' fibbing he was shot down in a helicopter over Iraq, but for some guitarists, the giddy thrill of determining exactly who played the solos on Aerosmith's 1974 version of "Train Kept A Rollin’" has kept band, bar and tour-bus arguments rocking for some time.

Hopefully, you did not have your money on Aerosmith guitarists Joe Perry and Brad Whitford.

Awhile back, Karen Ann Hunter let the riffs out of the bag once and for all in a Detroitrocknrollmagazine.com article that revealed that the "usual suspects" - session greats Steve Hunter and Dick Wagner - took those incredible solos on the track. Karen should know, as she is Steve's wife.

The story goes that Jack Douglas - co-producer of Get Your Wings, the Aerosmith album on which the track appeared - found Hunter outside the Record Plant Studios taking a break from another session, and dragged him into Aerosmith's room.

"Aerosmith was in Studio C, and I was doing work with [producer] Bob Ezrin in Studio A," recalled Steve Hunter. "I had a long wait between dubs, and I was waiting in the lobby. Jack popped his head out of Studio C, and asked 'Hey, do you feel like playing?' I said, 'Sure,' and I grabbed my guitar and went in.

"I had two run-throughs, and then Jack said, 'Great - that's it!' That turned out to be the opening solo on 'Train Kept A Rollin'.'"

At the time, Steve Hunter was unaware that Douglas had also brought in his session mate Dick Wagner to solo over the song's "simulated" live section that occurs later on.

As was the case back in the days when session musicians often "ghosted" parts thought to be played by band members, neither Hunter nor Wagner were given credit on the Get Your Wings album.

But now, if you want to challenge a fervent Joe Perry or Brad Whitford fan to a "bar bet" about who played the solos on "Train Kept A Rollin'", you can use Hunter's statement here to win yourself a few beers. Go get 'em!