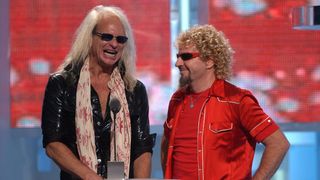 Ah, the media nastiness - or ticket-sale hype - continues to flail about the egos of Van Halen's two mega-vocalists as the band preps for its upcoming tour with original frontperson David Lee Roth.

Recently, Roth took a jab at Hagar, stating that Van Halen would not be performing any tunes from the Hagar era on the tour. The main reasons, according to Roth, were a "credibility issue" about his singing Sammy's songs, and the fact the Hagar tenure in the band delivered less than half the sales of his own reign.

"Why would you bring that into the proceedings?" asked Roth. "This hamburger don't need no helper."

But the statistics don't necessary reveal a totally nuclear Diamond Dave smack down of the Red Rocker.

Here are a few things to consider:

[5] For the heck of it, let's multiply Hagar's "per album sales average" by the seven Van Halen albums fronted by Roth. That puts Hagar at 47.25 million sales to Roth's 57 million. Still a solid win for Roth, but no nuclear winter.

So what we have are two thrilling lead vocalists that helped Van Halen sell a ton of albums. Fans can debate the rest.

That said, if Hagar ever gets frustrated with Roth's media daggers, he can take solace in the fact that his net worth is estimated at $120 million, while Diamond Dave has to make do with $40 million. And that discrepancy IS a smack down.

And here's another little comparison test for funzies: