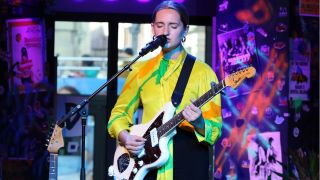 In the same way that many boomers can remember the first time they saw the Beatles on The Ed Sullivan Show, Los Angeles–based guitarist and singer-songwriter Madison Cunningham recalls exactly where she was when she discovered the band.

Her experience was a bit different though.

Cunningham grew up listening to and playing contemporary Christian music. By the time she learned about the Fab Four, their music had been absorbed into the very fabric of the culture, like traditional songs sung in a variety of voices across genres.

“I didn’t ever really hear the Beatles until I was graduating high school and a friend gave me Abbey Road,” Cunningham recalls. “My mind was seriously blown. I had been hearing these songs over the speakers of stores and restaurants for years. To finally be able to put a name to them - it was just the best day of my life.”

Cunningham quickly caught on to artists like Joni Mitchell, Jeff Buckley and Fiona Apple, and soaked up their approaches to melody and chord structure. On Who Are You Now (Verve), her 2019 Grammy-nominated sophomore LP, she wields those influences on an adventurously rhythmic and captivating collection of songs.

“These artists really did impact the way I heard music and the way that I felt I was allowed to make it,” she says. “They all seemed to have no reservations about how they wrote and played their instruments.”

Cunningham spoke with Guitar Player about how those influences shape her music, from the alternate tunings she uses to the expressive guitar work that animates the songs on Who Are You Now.

It’s interesting to see how you cover the range of multiple instruments in live performances with your trio setup. You do both piano and guitar parts at the same time.

It’s fun with the trio, because there are so many limitations. You’re having to learn how to not overplay, but also how to fill the space in a way that leaves room for the moment.

I try and think of what a piano player might do, or what a fourth instrument might do, and it’s always interesting to figure out how that could work on the guitar together with the vocals, bass and drums. Sometimes it can really twist my brain.

In performances of “All At Once” [from Cunningham’s 2019 EP, For the Sake of the Rhyme], you bend the neck and lean into the notes. There’s just so much emotion and groove in that song, and it’s all coming from your one guitar.

With that song in particular, the nature of the rhythmic groove is sort of like a drum part. That’s what I was trying to mirror, as if a drummer were behind me and playing the groove.

The guitar part even has the bass line in it. It’s one of my favorite songs to play because it’s kind of riding on the same note the whole time, and you just can vamp on it and take it somewhere else.

Where did you pick up those tips on how to get everything out of your instrument?

I grew up watching players like Adam Levy, who is one of my favorite guitar players, and a dear friend who was kind of like an uncle and mentor figure named Danny Donnelly.  I just watched the way they sort of nurtured their instruments and what they could pull out of them.

I remember with Adam, I noticed he didn’t use pedals or anything, but he got this incredible sound and tone out of his guitar. I asked him, “What’s your secret?” He just said, “It’s all in the fingers.” To me, that opened up a different layer of guitar.

Watching them play around the L.A. music scene inspired me to focus on the part of guitar that was a little more melodic and rhythmic. I never went to school, but I think my schooling was really moving to L.A. [from Orange County] at a young age and watching these professional players do their thing.

Did you find freedom in limiting the scope of gear you used?

Totally. It’s so nice to feel like you only need maybe three pedals. Maybe it’s a tuner pedal, a distortion or a boost, and maybe a tremolo.

I think it requires you to put in harder work in your bedroom, at home, behind the scenes. It’s ultimately very freeing to have a lighter load when you travel, which is why I love traveling with the trio.

Because even though there’s not a fourth instrument, there’s the possibility for it. There are so many notes on the guitar that can be played, so you can fill in the space for that fourth instrument, whatever it may be - keys or piano, or even another guitar.

You seem to prefer less conventional chord progressions and shapes. How did you begin exploring beyond standard chords?

Open tunings have really helped me with that. My friend who I mentioned earlier, Danny Donnelly, he introduced me to a few different versions of open tunings, like [low to high] E A D F# A D, and DADGAD.

I felt right away like it was a different way to play chords and melody. I felt lost in it, and the more lost I become as a player, the better it is almost. Theory doesn’t necessarily resonate with me, so I’m left to be led by my instrument.

Recommended listening: Who Are You Now

There are so many odd and incredible voices that you stumble upon in open tunings because the shapes are so different than playing in standard. I think a lot of that informs my songwriting.

I do write in standard, but mainly in open tunings. One thing sort of leads to another with it, and that’s how melodies form. I always say, “I make mistakes on the guitar and I call them chords.”

On “Pin It Down” [from Who Are You Now] you use an especially low tuning.

That one I believe is C F A# D# G C, so it’s C standard. It’s super low and hard to keep in tune for the most part, but it’s so nice. I was supposed to be finishing another song, and then I just decided to tune my guitar down as low as it would possibly handle. There are so many possibilities in the lower register.

What role do your guitars play in that? You’re mostly playing Fender Jazzmasters, right?

I also have an old Japanese guitar that I found online called an Inter-Mark, and Reuben [Cox, of Old World Style Guitars in L.A.] installed a rubber bridge. I tuned it down a whole step, of course, so it’s not quite a baritone, but it’s got that deep sound.

The rubber bridge gives the guitar a very muted banjo or violin sound, kind of like where all the notes drop off. It’s essentially the equivalent of putting a piece of paper between your strings. That guitar is one of my favorites, because it just naturally has all the tone built into it. You don’t have to contrive that sound. It’s just in the nature of the guitar.

What amps do you prefer?

Anything Fender. A Fender Deluxe Reverb is usually what I use, because it’s high enough wattage to where the low tunings don’t break up too much. It’s a clean and clear sound, and they’re obviously very reliable amps. At home I play a vintage Gibson Falcon.

You really take advantage of gain stages for shading your tones.

It’s a balance. It actually depends on the room we’re playing. Sometimes, if there’s a theater that has a lot of reverb in it, I try to keep the amp as clean as possible, so I’ll keep the drive way down on the overdrive pedal and turn the amp up, the bass down and the treble up.

But then if I’m in a really insulated room, I want more of a crunch, so I’ll turn the drive up a little bit and turn the overall volume on the amp down. It’s kind of a game between how to balance it right. Usually I’m just using the JHS Lightning Bolt overdrive pedal as a boost, not as an overly heavy and grimy sound.

Was being nominated for a Grammy for your work on Who Are You Now surprising?

It was totally shocking. It was an honor. I think it made me and my team so appreciative and grateful, and it gave us hope for the music industry in a way, because it was like, “Oh, anything is possible.”