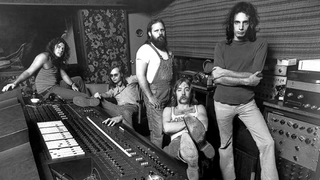 It’s time to shine a spotlight on Elliott Randall’s grinding, masterful guitar solo from Steely Dan’s “Reelin’ in the Years.”

Jimmy Page has reportedly called it his favorite solo of all time, and readers of our sister publication Guitar World selected it as the 40th greatest guitar solo (of all time) several years ago.

The tune, which was written by Donald Fagen and Walter Becker, graces the band’s 1972 album, Can’t Buy a Thrill.

The duo knew they had a great track for “Reelin’ in the Years” - if they could only come up with the perfect solo to jumpstart the catchy tune. So they put in a call to Randall, with whom they had worked in the backing band for Jay and the Americans, and who’d had played on many of the duo’s pre–Steely Dan demos.

“They were having trouble finding the right ‘flavor’ solo for ‘Reelin,’ and asked me to give it a go,” Randall told Guitar World several years ago. “Most of the song was already complete, so I had the good fortune of having a very clear picture of what the solo was laying on top of. They played it for me without much dialog about what I should play.

“It just wasn’t necessary because we did it in one take and nothing was written. Jeff Baxter played the harmony parts, but my entire lead—intro/answers/solo/end solo—was one continuous take played through a very simple setup: my old Strat, the same one I’ve been using since 1965, plugged directly into an Ampeg SVT amp and miked with a single AKG 414. The whole solo just came to me, and I feel very fortunate to have been given the opportunity to play it.”

By the way, the four-channel Quadrophonic mix of the recording has extra lead fills not heard in the more common two-channel stereo version.

Below, you can stream Steely Dan’s original 1972 studio recording, followed by a decent lesson video to help you get your “Reelin’ in the Years” foot in the door.