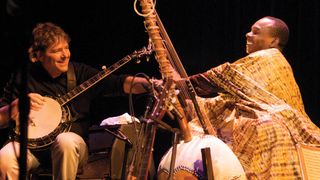 Fleck is married to and collaborates with another amazing banjo player, Abigail Washburn, and he continues to push banjo boundaries forward with his progressive fusion ensemble, Béla Fleck & the Flecktones, which celebrated its 30th anniversary in 2019.

A decade earlier, in an effort to trace the roots of his beloved instrument, Fleck traveled to Africa, where he took his American musical style into a genuinely African context by jamming with a host of musicians in various countries. Fleck’s trek originally yielded a lauded documentary, Throw Down Your Heart, and soundtrack, Tales From the Acoustic Planet, Vol. 3: Africa Sessions.

The new compilation, Throw Down Your Heart: The Complete Africa Sessions (Rounder), is an expanded edition that combines the documentary and soundtrack with the 2010 outtakes collection, Throw Down Your Heart: Africa Sessions Part 2, Unreleased Tracks, and adds a new album with kora master Toumani Diabaté titled The Ripple Effect, which is also available individually.

Throw Down Your Heart is endlessly fascinating. Some songs sound distinctly African, with Fleck improvising along, while others sound practically like African bluegrass. “Angeline,” which features the Luo Cultural Association from Uganda, is a lovely crossover. Fleck had been unable to schedule a live session with Diabaté while in the banjo’s motherland, so the iconic musician's contributions were overdubbed.

But Fleck set up a series of duo gigs shortly after returning to the United States in 2009, and those recordings make up The Ripple Effect. The title perfectly reflects the sound. Fleck’s banjo rolls and Diabaté’s harp-like cascades flow back and forth like a musical river connecting two continents.

Diabaté named the single “Nashville” after Fleck’s adopted hometown, while Fleck named the kick-off cut, “Bamako,” after the Malian birthplace of Diabaté, whom he calls “perhaps Africa’s greatest instrumentalist.”

The interplay on their interpretation of “Dueling Banjos” is priceless. It’s also a somewhat ironic closing track as it takes Fleck full circle back to one of his original inspirations, while it simultaneously confronts and debunks the typecast American image of a banjo player.

What inspired you to trace the roots of the banjo?

The stereotype of the white, southern banjo player is amazing to me now that I’m a banjo player for life, because I grew up in New York City, fell in love with the banjo and couldn’t explain it.

Everyone would ask, “Is there a banjo player in your family?” No. “Did you like country music?” No. The sound simply took me over, and that was the magic of Earl Scruggs.

But the more I played the banjo in my own atypical way, the more questions it brought up. That inspired the search, and the more information I got about the banjo, the more I realized it wasn’t strictly a southern white instrument.

In fact, it was there at the very beginning of jazz in Louis Armstrong’s first bands. The banjo was the comping instrument. There were banjo orchestras in those early days.

People played the banjo all over the United States before bluegrass or country music had even been established. It was simply around. Before the guitar became the main fretted instrument in the United States, it was the banjo.

To put it in perspective, you have to realize that black folks played the banjo on the plantations, and then white folks wearing blackface would do a poor imitation while singing about how awesome it was on a plantation. That was very offensive to black people, so they were eager to get rid of it.

When the guitar came up as an alternative, they embraced it. They basically banished the banjo and tried to forget all about it. They see it strictly as a white southern instrument via stereotypes perpetuated by the movie Deliverance [which features the infamous “Dueling Banjos” scene] and the television shows Hee Haw and The Beverly Hillbillies.

Despite all that incredible banjo playing, the stereotypical image is what stuck, but that’s only a fraction of the story. The galvanizing moment for me as a kid in Queens was hearing Earl Scruggs playing the banjo, and it had nothing to do with tradition. The sound thrilled me, and I wanted to know what it was.

What was so transformational about Scruggs’ style?

Before Earl came along, people were doing a lot of what’s called either frailing or clawhammer banjo, where you pluck with your thumb and strum with your fingertips. It’s a very rhythmic and trancey style.

Occasionally someone would play a two-finger style going back and forth with the thumb and index finger. That evolved into a three-finger style incorporating the middle finger. Earl Scruggs made that idea into something marvelous.

It wasn’t that he was the first guy to play with three fingers on his right hand and rotate the starting point to make an effortlessly fast rippling sound; he found a way to make it into great music.

It sounds so simple now that people mention so and so and say he would have been the guy to get credit if he’d played with Bill Monroe before Scruggs. But no one played like Earl Scruggs. He was just one of those incredible figures.

From a technical perspective, can you address the importance of Scruggs’ three-finger rotation?

Using three fingers on a five-string instrument to play music with usually an eight- or 16-note bar creates a lot of natural syncopation. The main rule is that once you start going, you can’t repeat the starting point of a roll on the same finger. That makes the syncopation awesome and joyful.

In the first scene of the Throw Down Your Heart film, you’re playing with a very young fellow, and then a guy starts clapping along in triplets!

That was a moment I’ll never forget. I remember thinking, Geez, I don’t know where I am! But it happened over and over again. Where they felt the beat was so different from where I felt it, and their feel was much more sophisticated.

Can you compare the instrument you brought along to the banjos you saw in Africa?

I brought two banjos with me. One was a pre-war Gibson Granada Mastertone, which is essentially the same instrument Earl Scruggs played. I also brought a Deering Tenbrooks that I could drop down into lower tunings. To my ears, nothing sounds like a quality old banjo when it’s tuned up. Lots of banjos, including newer ones, sound good tuned down a bit.

But I digress. In East Africa there are no banjos, but I went there because I wanted to put my banjo into a variety of African settings.

In West Africa there are instruments with various amounts of strings - not five-string banjos, like mine, but a variety with four or less that incorporate a short string like mine. I haven’t run across that anywhere else, not even on the banjo-like instruments in China or India.

An American named Joel Walker Sweeny took credit for adding the fifth string to the banjo, but my theory is that he added a lower string, not the high-pitched short string, and that perhaps his claim got popularized incorrectly. There are no frets on African banjos. In fact there is no metal, period, but to me it’s still a banjo.

I have lots of modern banjos with gut strings on them, and while I use frets, there are fretless banjos being used all over the United States to play old-time music that’s closer to the original African stuff. The music is central because that’s what’s in their souls. They would play it on any instrument available.

You sound like a guest jamming on some tracks, such as “Ah Ndiya,” featuring Malian singer Oumou Sangare, whereas “Old Joe Jatta” sounds like African bluegrass.

That one was my idea. I found a way to play a tune called “Old Joe Clark” all syncopated in the banjo roll, and it sounded very African. I ended up playing that with percussionists in the Gambia.

It was fun to jam on something with no other plucking instruments. I listened to a bunch of African music before I went over there, and I practiced playing “Old Joe Clark” at jams before I left, but it was a joy to improvise with the real cats.

That’s some serious fingerpicking, literally. Do African players use fingerpicks the way you do?

No. They strike down with their fingernails, as opposed to the way I grab upwards using fingerpicks, like Earl Scruggs. They provide an edge to play with more precision. I’ve never understood how a player like Jeff Beck can play guitar with such precision using his fingertips. That’s very hard to do on the banjo.

But fingerpicks are a pain in the ass. It’s hard to keep them from clicking on the strings. There are plenty of good fingerpicks out there, but I got used to the old National ones. There’s a certain thickness and tone to that metal, and I have a good understanding of when they’re worn out and it’s time to change them.

The Ripple Effect with Toumani Diabaté starts off nicely on “Bamako,” as you two pluckers call and answer very distinctly on banjo and kora before launching into interplay. Can you describe the kinship between the instruments and the players?

I feel like we’re brothers in rippling because he’s a plucker too. You don’t do much strumming on the kora. It’s a 21-string instrument like an African harp, with strings on either side that you pluck with both hands to create rolling arpeggios of 16th notes that ripple and ring into each other.

Once we start locking those 16th notes together, an ebb and flow develops, with peaks and valleys that lead to an evocative emotional quality. His elegant rhythms create what feels like a river of ripples. I have fun riding the waves.

It’s wild that you finally tackle “Dueling Banjos” with a kora player!

That’s one of those things I swore I would never do, but there I was suggesting it to him. “Yeah, we know that one back in Africa,” he said. I thought it would work well if we started jamming back and forth before suddenly launching into that.

I’m always looking for a way to win over an audience, and they loved it, because we were in a Seattle jazz club where people were surprised he knew it. I’m amazed my parents let me see Deliverance when I was a boy, but there’s something very right about that movie, as far out there as it is.

The banjo scene is awesome, and it’s an important part in the story of banjo. The Beverly Hillbillies was my first exposure to banjo music, but Deliverance inspired me to actually go out and get one.

The scene was so powerful because of that sense of communication with a whole different culture. That was kind of the template for my whole life, using the banjo to connect with people from other places.