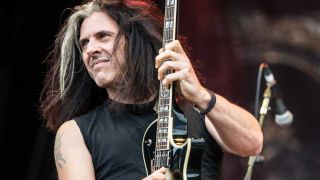 When accessing Alex Skolnick's prodigious body of work as one of the world’s most accomplished and respected guitarists, it almost makes sense to consider retitling this article “My Career in Five Styles,” since his résumé is as expansive as it is impressive.

The Berkeley native and former student of Joe Satriani was initially hailed for his decade-long stint as lead guitarist with West Coast thrash-metal pioneers Testament.

This musical reinvention led to the formation of the Alex Skolnick Trio, a group that blended the ethos of classic hard rock and metal with the improvisational freedom and harmonic complexities of bebop.

The band’s 2014 self-titled release - which included guest spots from flamenco guitar duo Rodrigo y Gabriela, oudist Adnan Jouban and violinist Rachel Golub, among others - was both a career highlight and a most unique and visionary artistic statement from a high-profile rock guitarist.

Since then, Skolnick has been involved in various projects, including recording and touring with Testament, which he rejoined in 2005, as well as penning his autobiography, Geek to Guitar Hero. We asked him to pick five highlights from his voluminous and genre-defying career.

“This is the song from our earliest days that I enjoy playing the most. Testament was on its third record, and I was starting to have E fatigue. There were a lot of songs and solos in the key of E. The lead for this track was actually based on a modal exercise I had put together.

“When I was a teen, I studied with Joe Satriani and he introduced me to modes, but some of it was still over my head, and I was continuing to work on mastering them around that time. [Testament rhythm guitarist] Eric [Peterson] had come up with the main riff, and the tempo and feel seemed to be a close fit for the exercise I was shredding, so I sped it up a bit and used it as the basis for the solo.

“It goes through various key centers, kicking off in C#, progressing to F#, descending back down to C#, landing in G#, then ascending to A, B and back to C# before culminating in an E melodic minor run starting on a B note. At the time, that was a brand-new scale to me. I hadn’t heard anyone use it in a rock context.“

“Another significant aspect of that track was the gear I used. Until Metallica’s Black Album became a huge hit in the early ’90s, amp manufacturers weren’t really making anything with a high-gain stage suitable for thrash metal.

“There were techs who would modify them, but mostly the Marshall sound then was more along the lines of what you heard on a Foghat or Foreigner record. Around that time, I was introduced to a high-gain rackmount preamp called the ADA MP-1.

“It was designed to be used with a power amp and speaker cabinet, but I did what you probably weren’t supposed to do, which was plug it straight into my Marshall, like a distortion pedal. It worked though, and I got a saturated sound I was happy with. That was my Testament rig for the next few years.”

“When I began studying jazz in the early 2000s, this Aerosmith classic was one of the first songs I reharmonized for solo guitar. As much as I loved playing standards like ‘I’ll Remember April’ or ‘Autumn Leaves,’ I realized that the world probably didn’t need new versions of them, so I started working on jazz arrangements of hard rock songs.

"For example, on the initial verse melody, I’m playing over a Dbmaj7-to-Cm7 chord progression, then hitting a Bmaj7#11 for the note corresponding to the lyric ‘gone.’

“This particular recording is from a live concert, and during the improv we just open it up on a static C tonal center. I kick in a wah pedal at one point and quote some other classic rock standards, like ‘Dazed and Confused.’

“One cool aspect of playing with the trio is that I’m the old guy. In Testament, I was the youngster, but now I’m playing with younger musicians [bassist Nathan Peck and drummer Matt Zebroski], and they have influences I don’t have, such as dub, drum and bass, and jungle, all of which they bring to the table. They set up the groove for the song, and it was a feel that I probably wouldn’t have thought of.

“For this track I was playing a Godin Montreal Premiere. I love it because it’s a lot like a Gibson ES-335: It’s easy to play, and although it has a great jazz hollowbody sound, it can also shift gears and handle string bends and distortion.”

“This tune is based on a tricky polyrhythm with an underlying pulse of 5/16. I always have ‘contests’ at my gigs, where I ask people if they can guess the time signature. At one point, the ostinato has an extra beat to accommodate the melody, and, to be honest, even I had a tough time writing out the chart for it.

“The solo in it is based on an open A minor key center, and I hope to do a live recording of it at some point because we’ve taken it to some really interesting places.

“When I first started gigging and recording with the trio, I downplayed the rock aspects of my playing because I felt I had something to prove to the jazz world, but now I’m pretty comfortable shifting between whatever different styles I’m feeling.

“On this tune, it’s fair to say I’m channeling the fusion influences of players such as Allan Holdsworth and Pat Metheny. The take you hear on the record is the one we collectively felt had the best overall vibe and energy.”

“When I wrote this, I definitely had Rodrigo y Gabriella in mind and was so glad we were able to make the collaboration happen. For years, I had wanted to do an internationally flavored acoustic album, and they were a big inspiration for this.

“They had taken my trio on tour, and I had performed with them several times as a special guest, so we already had a great creative rapport. They also introduced me to some of the other musicians who wound up playing on the record.

“For this track they played nylon-strings, and I played a steel-string with the B string tuned down a whole step, to A. There’s a pull-off and a repeated unison note between the second and third strings, which is what makes the main lick work by giving it a percussive feel.

“It starts with an E dominant chord with a b9, and I was able to explore some harmonic minor territory that reminded me of the Al Di Meola/Paco de Lucia/John McLaughlin collaborations of the early ’80s.”

“I think this song really captures what Testament is about today. It’s played in drop-C# tuning [low to high, C#, G#, C#, F#, A#, D#], and nowadays we play everything either in that tuning or standard tuning down a half step.

“Our bassist, Steve DiGiorgio, is very technically proficient, and I was thinking that we don’t have too many songs that start out on bass or feature bass by itself anywhere. I wrote the opening bass riff with that in mind when I was just messing around with a bass and a wah pedal, trying to cop Geezer Butler’s vibe on the intro to Black Sabbath’s ‘N. I. B.’

“There’s a harmonic-minor feel for the verse parts, and the intro riff and chorus are in 6/4, which is a time signature we don’t have a lot of either. It also starts with a bass feature in the middle breakdown, then goes to some really interesting places.

“To track this song, I used my ESP signature model and a Jam Pedals Tube Dreamer 88 into a Kemper Profiler.

“For a while, I insisted on using amps in the studio and the Profiler only for live shows, but they’ve gotten so good that we wound up tracking all the guitars on the record with them. I have one at home, and it’s come in quite handy during lockdown since I can use it for demos and collaborations with other artists.”