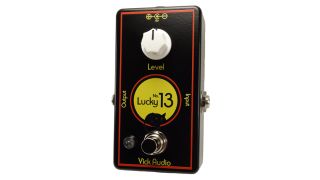 Vick Audio has announced that it is reissuing its Lucky No. 13 fuzz pedal, which has been out of production for six years.

Based on the classic, one-knob, ‘60s-era Colorsound fuzz pedal, the Lucky No. 13 features a PDT True Bypass, Neutrik Audio Jacks and a powder-coated enclosure. Its single knob acts as a volume level, with the guitar’s volume used to change up the pedal’s gain.

It looks to emulate the character of the Colorsound, but with more gain and a more modern voicing, resulting - Vick Audio says - in “an exceptional smooth fuzz with thunderous lows and loads of singing sustain.”

The Vick Audio Lucky No.13 fuzz pedal is available now for $119.

For more info on the pedal, stop by vickaudio.com.