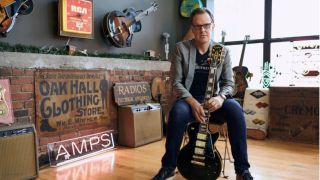 Naturally, there are few better potential subjects for an episode of Gibson TV's The Collection - a show that, as its title suggests, dives deep into its subjects' personal guitar collections - than Bonamassa.

This week, Bonamassa dutifully obliged, inviting Gibson's Director of Brand Experience, Mark Agnesi, and the rest of the Gibson TV team to "Nerdville East," his Nashville home, and the location of a decent chunk of his incredible guitar, amp and music memorabilia collection (the rest resides in the main Nerdville, in California.)

You can check out the full, hour-plus long episode below.

There's also a 1958 Gibson Les Paul Custom Black Beauty, which served as the inspiration for the blues guitarist's latest signature Epiphone, which - oh, did we forget to mention Bonamassa has a new signature Epiphone that he unveils in the video?

That new guitar is the Epiphone Les Paul Custom “Black Beauty,” which will be available October 8.

“I made it a super-playable instrument, throaty but clean, and the lead pick up just barks,” Bonamassa said of the guitar. “I fell in love with it, it’s a great Black Beauty and you just play this thing into the ground. Epiphone did an excellent job re-creating this guitar and I’m excited to share it with everyone.”

We'll be sure to share more details about the Epiphone Les Paul Custom Black Beauty as they become available.

For now though, keep your eyes on epiphone.com.