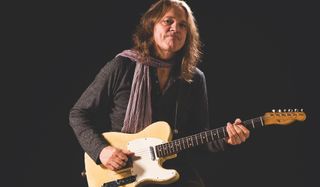 Rig and pedalboard tours are always a treat to watch. They're especially fun though, when they involve Robben Ford (holding a ’52 Gold Top, to boot!).

Having recently fielded a multitude of questions from fans about his gear, Ford took to Instagram to give viewers a private tour of his pedalboard, which you can check out below.

“It hasn’t changed very much in quite some time,” Ford says of his nonetheless impressive pedalboard. “In fact, I might say it hasn’t changed at all, other than the addition of the [Fulltone] Deja Vibe, which I started using maybe a year ago.”

Ford says that his most important effects units are his Strymon TimeLine Multidimensional Delay - of which Ford says “I’ve found that the TimeLine is the absolute best-sounding foot-pedal delay you can have" - and his TC Electronic Hall of Fame Reverb - which he relies on “because my amps don’t have reverb.”

I have seen that some of you have been curious . . . SO I am hoping you enjoy. 😎 Here is a word about my pedalboard, playing my 1952 Les Paul. 🙏 #guitarpedalboard #robbenford #infovideo #hopeyouenjoy #workingfromhome #nashvillestrong Robben Ford Official

Ford's 'board also contains a Vertex Boost, an Electro-Harmonix POG and a Hermida Audio Zendrive - each of which he happily demonstrates. The board also features a TC Electronic PolyTune and an independent footswitch to activate boost and overdrive on his beloved Dumble amp.

Ford, in jest, apologizes for not having a "more interesting pedalboard," but, as he himself has proven, not all of us have to have Kevin Shields-sized boards to make great music now, do we?

For more on Ford and his music, head on over to robbenford.com.