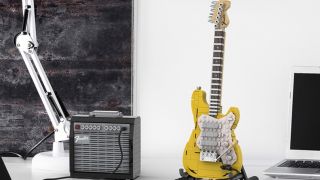 Back in August, we were amazed by intrepid amateur builder morimorilego's full-sized, 1:1 scale Lego Les Paul.

If you're more of a Strat fan yourself though, have no fear, as Lego and Fender have teamed up to create an official Lego Stratocaster kit. Designed by Tomáš Letenay, the kit is expected to go into production in 2021, according to Brick Fanatics.

Though it isn't a 1:1 scale recreation, there's no mistaking the trio of single-coils, headstock and tremolo for anything else - an impressive feat.

“Everyone has seen the Fender Stratocaster guitar, it’s super famous and we think it’s going to be exciting to bring this to life using Lego bricks,” said Lego Ideas Design Manager Sam Johnson.

“Music is a relatively new place for Lego to play in so we’re really excited to see how we can execute this.”

No word on the price yet, but be sure to keep an eye on lego.com if you're interested.