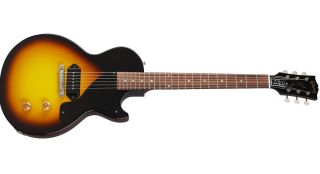 Gibson has teamed up with Neil Young, Promise of the Real and Willie Nelson & Family guitarist Lukas Nelson to create the Lukas Nelson ’56 Les Paul Junior.

Based on Nelson’s own '56 Junior, this guitar features a single-cutaway slab mahogany body, fat ‘50s-style mahogany neck and a rosewood fingerboard with medium jumbo frets and dot inlays.

“The beauty of this guitar is that it is very versatile with the sound," Nelson said in a statement. "In fact, I can get a lot of different tones just from the P90 and the way that I attack the strings and through the intonation and the vibrato that I give.

“If I hit it lighter, it doesn’t break up as much. If I get into it, it gets a lot of grit and dirt and breaks up. It’s a versatile tone, which I’m pretty grateful for. Frankly, Gibson has been nothing but incredible to us - to me - since I’ve met them. And this guitar has taken me on a long journey. It’s taken me to some amazing places, and I hope that a lot of other people get the same opportunity with their version of my guitar.”

For more info on the guitar, stop by gibson.com.