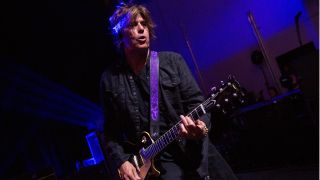 Thanks to their diverse canon - which includes the 1992 breakout hit “Plush” (from Core), the bluesy acoustic “The Big Empty” (Purple) and the relentlessly driving pop tune “Vasoline” (Purple) - STP remain staples on radio and are popular with audiences on digital streaming services.

Additionally, guitarist Dean DeLeo is widely praised by many other players for his unique, inventive chord voicings, exquisitely layered tones and searing melodic leads. Along with his brother Robert, who serves as STP’s bassist, Dean has written or co-written many of the group’s songs.

The band parted ways with original vocalist Scott Weiland in 2013, eventually replacing their charismatic frontman with former X-Factor contestant Jeff Gutt. (Tragically, Weiland would die from a drug overdose in 2015.)

Throughout STP’s nearly 30-year recording career, DeLeo has provided some of the most sonically and harmonically interesting and innovative writing and playing in the rock guitar lexicon.

While preparing for a stint with New York City–based Stone Temple Pilots tribute band Lady Picture Show, I received an in-depth and highly worthwhile education in the musical artistry and inventiveness that pervades the DeLeo brothers’ catalog of modern classics. In this lesson, I’d like to share some of those insights.

To begin, check out the chord shapes illustrated in Ex. 1, which roughly sketches out the voicings found in “Plush.”

The chromatic movement on the B string pitted against a droning pedal-tone bass note (the open D string) creates some hauntingly beautiful dissonances here, bringing to mind both Cream’s cover of the old Skip James blues tune, “I’m So Glad,” and “Come and Go Blues” by the Allman Brothers Band.

But unlike those songs, where the root serves as the pedal tone, here it’s the 5th of the key, which in the key of G is D.

Particularly noteworthy is the unusual Gdim/D chord, which includes both the diminished, or “flatted,” 5th, Db (B string, 2nd fret) and the natural, or perfect, 5th, D (the open D string), a juxtaposition that theoretically should not work but does here.

In the full-band arrangement of the song, the chords are pitted against a complementary low bass line, played by Robert, and Ex. 2 offers a reworking of its iconic intro that additionally incorporates some of the bass notes into the guitar voicings and also includes the dreamy Ebmaj7 chord that appears later in the song’s pre-chorus and alternates with a first-position F barre chord.

The song’s tonal center shifts between the key of E major, on the heavy intro riff and choruses, and its relative minor, C# minor, on the verses.

The restless-sounding, non-diatonic C#7/B and A#m7b5 chords that Dean plays during each verse follow a chromatically descending “minor drop”-style progression, providing some compelling harmonic tension and dissonance before the eventual resolution to a big open E chord (preceded by Asus2).

Ex. 4 combines elements of the song’s intro, verse and chorus parts. Although the era of the song’s release may have been the height of the alternative/grunge movement, its harmony owes far more to the likes of “California Dreaming” and ’60s pop in general.

Our next DeLeoian harmonic exploration is largely based on the cool and unusual chord voicings featured in the longingly bittersweet 1999 hit “Sour Girl” (No. 4), some of which are illustrated in Ex. 5.

My personal favorite chord here is the gorgeously lush Bbmaj9, which is the second chord in the song’s first verse, and the more compactly voiced Bbmaj7sus2, which is a higher-pitched and tighter-sounding variant that Dean substitutes in the song’s later verses.

This voicing, which occupies a narrower register on the top four strings, may also be thought of as F/Bb - an F triad over a Bb bass note.

Drop these dulcet tones into Ex.6 and be sure to strum upstrokes on the syncopated chord changes that fall on the eighth-note upbeats (the “and” counts).

This strummed figure and the ringing arpeggios that follow in the last two bars capture the vibe of the original song’s intro and verse sections.

Aside from his talent for crafting kaleidoscopic chordal clusters, Dean DeLeo is also a great hard-rock riff writer, and Ex. 7 pays homage to the guitarist’s low-string grinding on songs like “Sex Type Thing,” “Crackerman,” “Wicked Garden” (all from Core) and “Tripping on a Hole in a Paper Heart” (Tiny Music… Songs from the Vatican Gift Shop).

All of those songs at some point incorporate a 2nd-position low F#5 power chord grip and are enlivened by a squall of natural harmonics (N.H.), like those in bars 2 and 6. (Hint: make sure you’re playing with a bridge-position humbucker-equipped guitar through a high-gain amp and kick on a chorus or flanger effect to accentuate the harmonics.)

As a lead player, Dean certainly possesses a lot of pick-hand mojo and fretting dexterity, but he rarely indulges in lengthy scalar excursions or arpeggio runs, opting instead to compose song-serving melodic mini masterpieces that balance fire and finesse equally.

Most of DeLeo’s melodic choices center around major and minor pentatonic scales but are spiced up with major 3rds, 6ths and 9ths as well as chromatic leading tones and lyrical bends.

Ex. 8 offers a demonstration of this type of playing, inspired by the guitarist’s solo licks in such tracks as “Lady Picture Show” (Tiny Music) and “Huckleberry Crumble” (Stone Temple Pilots).

Played over a medium shuffle groove in the key of D, the single-note lines effectively outline the I (one) and IV (four) chords, D and G, respectively, adding both chromatic and diatonic embellishments but landing on chord tones in key places.

Our final offering, Ex. 9, is inspired by DeLeo’s incendiary lead break in “Vasoline” and opens with a series of rapid-fire hammer/pulls (bars 1–4) followed by slinky pull-offs to open strings, effectively outlining a G7 tonality throughout.

Notice how the eight-bar phrase begins in the upper register on the high E string and works its way down and over to the low E, ending with a haunting, low pull bend.

Reflecting back on his varied musical influences and approach in a 2008 Guitar Player interview, DeLeo confessed that his approach was more intuitive than scholastic.

“I know what I want to hear, and it sometimes takes me a while to work it out,” he explained. “But I eventually get my point across.” He has certainly done so, and very successfully and inventively.