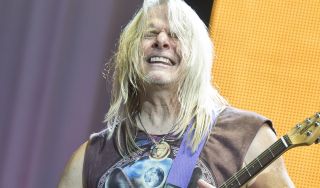 In every chord progression, there is a melody hiding in the low strings, just waiting to be brought to life. But it often seems that more advanced guitar players tend to play melodies mostly on the high strings and frets, well above the chords and harmony.

However, one of the most natural places to play a melody on the guitar is on the low strings, and this fact was not lost on classic country players, who would often play beautiful themes on the lowest three strings.

I picked up a lot of low-string melodies when I was younger by watching cowboy movies or seeing country guitarists perform live. Sometimes these players would even use baritone guitars to give the notes more twang and depth.

Inspired by these wonderful sounds, I wrote a galloping instrumental called “Tri County Barn Dance,” which appears on my solo album Major Impacts 2. Its main theme is presented in the eight-bar musical example below.

First, familiarize your ears with the phrase’s harmony by playing through the chord progression (which is presented in the chord diagrams above the music) using an eighth- or 16th-note-based strumming pattern.

Why focus on the chords first? Because, as you’ll soon find out, the best part about playing a melody on the low strings is that while you’re doing it, it’s often easy to strum the accompanying chords in the spaces between the notes.

The melody is shown in the notation and tablature staves. Notice that each time a new chord appears, the melody note directly beneath it lies within that chord. After learning the melody, your next goal should be to strum each chord at least once immediately after playing its initial melody note, letting the chord ring as best you can while you continue playing the melody.

You’ll notice that you actually have space to strum the chords a few times during the longer melody notes. This melody/accompaniment double-duty is not an exact science. Experiment with the approach and find what works for you, striving to make it sound lively and almost as if there are two guitarists playing.