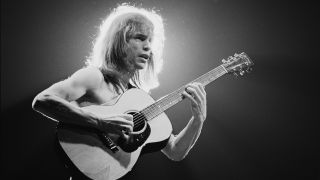 Within the hallowed catalog of progressive rock music created during the late 1960s and early ’70s, a handful of groups are responsible for a surge of excelled musicianship and composition that flourished during the birth and heyday of this highly creative and musically and lyrically sophisticated sub-genre of rock. This pantheon of pioneers includes extremely talented and forward-thinking musicians, well known for routinely pushing their musical abilities to new heights of creative and technical achievement. While there are several bands and individual musicians that come to mind, it's Rock and Roll Hall of Fame inductees and progressive rock legends Yes that arguably take home the largest trophy, as they've built their respected legacy using a distinct approach of artistic discovery and musical self-expression for 50 years, which is extraordinarily impressive.

While it's true that any member of Yes could have an entire book written about them (and several Yes-alumni do have their own published biographies), it is the contributions of guitarist Steve Howe that really helped the band achieve its original sound, style, and direction when he joined Yes in 1970, notably replacing original guitarist Peter Banks. Howe single-handedly introduced generations of rock fans and musicians to the wonderful worlds of classical, jazz, bluegrass, and folk guitar music, by wielding an eclectic blend of influences and a mastery of shifting among various styles with ease. The guitarist instantly elevated himself above the pack of blues-based rock players that emerged during the '60s and '70s by using this interesting combination of styles and approaches as a guide.

Howe’s adventurous exploration of sounds and textures are driven by his fascination with non-mainstream musical styles, unusual rhythmic concepts, and classically-flavored melodic ideas. He is notoriously quoted for taking great pride in being different, musically speaking, and many of his riffs, licks, and solos feature left-field phrasing, finger-twisting fretboard gymnastics, and precisely crafted fingerings, which routinely leave traditional blues and rock players in the dust, so to speak. Howe’s insightful approach to the fretboard and ability to combine different elements from various musical styles creates his signature sound and musical identity. It's an approach of style fully-realized during his tenure with Yes in the '70s. Compared to the average rock guitarist, Howe’s playing is noticeably different, but that's what makes it so interesting, fresh, and inspiring. With influences including six-string legends such as Chet Atkins, Wes Montgomery, and Barney Kessel, the icing on Howe’s musical cake comes with the foundation of learning a mountain of classical, bluegrass, and folk guitar music, which feeds his appetite and love for the acoustic guitar. This lesson will focus chiefly on Howe’s electric playing, but he is an equally accomplished acoustic guitarist, a feat documented by his acclaimed acoustic guitar compositions, such as “Clap” (The Yes Album) and “Mood for a Day” (Fragile), the former presenting a notable and beloved hybrid-picking (pick-and-fingers) workout for acoustic guitarists all over the world, and the latter having become a modern standard within the classical guitar repertoire.

It's interesting that Howe's brilliance on the electric guitar is sometimes misunderstood, but part of this is due to his complete awareness of the fretboard and a personal quest to locate efficient fingerings for everything composed or performed. Searching for specific and refined fingerings can lead to various performance issues when attempting to learn how to play his music authentically, and these calculated fingerings can leave uninformed players confused and with twisted digits. As you study the material in this lesson, be sure to use the fret-hand fingerings indicated in the standard notation for each example. If you cannot read standard notation and rely on the tablature, you can still benefit from following the fingering directions, which indicate which fret-hand fingers to employ. (The numbers 1-4 indicate the 1st-4th fingers, respectively.) While this additional notation it not commonly found in modern guitar sheet music, you'll find it often in classical guitar method books and transcriptions. Howe originally learned the merits of using logical fingerings from studying classical guitar music and technique, where he first explored the mathematics of guitar fingerings and the neck.

Unlocking Howe's navigation methods and connecting the dots on neck, so to speak, is where the “geometry” aspect of this lesson comes into play, but don't be intimidated by this analysis, as we're simply applying the directional terminology found in geometry to the fretboard. Doing this will help you see the multi-directional movements you can visualize as you navigate the grid. The four directional terms we'll apply are vertical, horizontal, diagonal, and reverse-diagonal movement (or motion). To prepare, sit down with a guitar in your lap and focus on the fretboard in front of you. This player’s perspective of the neck is what we'll mentally visualize and refer to as we begin unlocking Howe's secrets and discoveries. Learning how to traverse the fretboard using each of these directional movements will help your playing immensely, and as a bonus you'll uncover the origin behind a number of famous riffs, licks, and phrases from the classic Yes catalog. Before moving ahead, be sure to carefully study Fig. 1, a useful visual aid presenting a set of fretboard diagrams that indicate the four directional movements we're applying to the fretboard, for both ascending and descending motion.

Vertical is the first movement we'll explore, and this should be relatively easy for most guitarists, as it occurs in standard fingerings for major and minor scales, including the widely used minor pentatonic scale. Once you have the premise behind vertical movement on the neck, try tackling the phrase depicted in Ex. 1, which brings to mind the signature melodic C9 (C E G D) arpeggio-based motif Howee plays in “Long Distance Runaround” (Fragile). Notice how this elegant melodic phrase remains in one position, via the use of a refined and efficient fingering, which flows across the strings vertically. The motion ascends from the D string over to the high E, before descending and finishing on the G string.

Ex. 2 offers another sample of vertical motion, inspired by a busy melodic sequence heard in “Roundabout” (Fragile). Notice how this major scale-based phrase incorporates ascending and descending vertical motion across the strings while also utilizing a horizontal position shift to move the phrase from G to Bb.

To help you further explore horizontal fretboard movement, Ex. 3 offers a variation on the busy E minor pentatonic (E G A B D)-based lead lick Howe plays in “I've Seen All Good People” (The Yes Album) using hybrid picking. As the phrase unfolds, notice the reiterated open high E note, plucked with the pick hand’s middle finger, which creates a twangy drone and exemplifies the influences of country and bluegrass guitar playing on Howe’s style. This type of horizontal movement can also be found in the music of other electric guitar legends, such as Al Di Meola, Eric Johnson, and Eddie Van Halen, to name a few.

Ex. 4 presents another highly musical application of horizontal motion and features a variation on the busy melodic arpeggios Howe plays in “Yours Is No Disgrace” (The Yes Album). This fluid arpeggio workout is in the key of Bb major and moves along the neck using a horizontal approach that targets the arpeggios Bb (Bb D F), Cdim (C Eb Gb), and Cm (C Eb G), gliding along the top two strings exclusively. Other examples of this kind of arpeggio approach in rock music can be found during the legendary harmonized guitar solo in the Eagles' “Hotel California” (Hotel California) and Mark Knopfler's climactic lead licks in the Dire Straits classic “Sultans of Swing” (Dire Straits).

To give your fingers and mind a diagonal-movement challenge, Ex. 5 reveals a reworking of the busy chromatic-based riff from “Heart of the Sunrise” (Fragile). Aside from the pick-hand challenge and shifting benefit from working through this busy idea, you'll also gain a visual understanding of how to travel across the strings and up the fretboard using diagonal motion. For those unfamiliar with this kind of movement, it can be challenging at first, until you begin to see the individual notes and octaves connected on the grid. Making these octave-based connections—octave linking—will help you view and understand the layout of the entire fretboard. Mastering diagonal fretboard movement takes time, practice, and patience, but the benefit of unlocking the neck using this motion and mental visualization is immense and should be eagerly explored.

Ex. 6 introduces reverse-diagonal movement with an aggressive, chromatic-based, rockabilly-style frenzy similar to a run Steve plays in his solo in “I've Seen All Good People.” As you play through this phrase, be sure to employ all four fret-hand fingers. In addition to helping you discover a new type of movement on the neck, this example also serves as a great picking, fretting, and string-shifting warm-up exercise.

Now that you've experienced the four directional movements individually, try locating additional licks and phrases that feature combinations of these approaches. Ex. 7 is inspired by a fast legato run Howe pays in “Roundabout.” As you practice this challenging phrase, notice the abrupt vertical movement occurring within the six-note legato motif, followed by a descending horizontal bass note moving along the A and low E strings.

The concepts, ideas, phrases, and licks presented in this lesson represent but a small cross section of Howe’s multi-faceted playing style and technical arsenal. If you explore the guitarist’s complete, extensive discography, you'll discover a prolific and inspired solo career that began with his acclaimed 1975 solo album debut, Beginnings. Howe continued his musical output and discovery with Yes until 1980, before moving on to join the groups Asia and GTR (also featuring guitarist Steve Hackett) in the '80s. During this period ('77-'81), Howe won Guitar Player's prestigious and coveted Best Overall Guitarist title five years in a row in the magazine’s annual Reader's Poll. In 1981, Howe was the first rock guitarist ushered into the GP Hall of Fame.

The following decades begin an off-and-on working relationship with Yes, including various side-projects with Yes-alumni and other super-talented musicians and artists. Howe's music has continued to evolve and develop through the years, and studying specific aspects of his ingenious playing style and approach to music will shake things up for any guitarist, regardless of their own stylistic leanings. Good luck and enjoy!