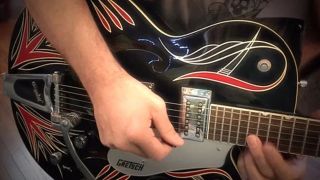 In an edition of Quick Licks a few years back, Matt Blackett schooled us on how to revoice a first position E minor pentatonic scale as a combination of open stings and fretted notes higher up the neck for a unique tonal effect.

To fully understand and further exploit this note-repositioning technique, first conceptualize your scales as a collection of notes that relate to one another and not just as a set pattern to be played in position by rote.

Then, factor in those open strings. Since all five notes of the E minor pentatonic scale can be played as open strings, the opportunity for note reassignment is practically endless.

Ex. 1 is a swaggering series of descending pull-offs. Every other note is articulated twice - first, as an open string, then as a fretted note on the next string - providing a propulsive rhythmic roll. Here, I’ve resolved it to E, but if you target a B chord instead, you’ve got a righteously rollicking blues turnaround.

Ex. 2 is a “Baby Please Don’t Go”- style phrase that pairs seventh position fretted notes with open E and B strings, and concludes on an A tonality. This full-sounding lick (and similar-sounding ones that you’ll likely discover on your own) provides major overtone nirvana when improvising in a solo acoustic context.

The guitar has open strings, and it allows you to grab the same note in multiple places, so you might as well take advantage of these two inherently unique features when playing scales!