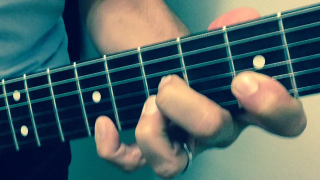 If you’re a guitar player who doesn’t use their pinkie, you’re neglecting at least 25 percent of your playing potential.

And if that describes you, then read on, because it’s high time you stopped babying your baby finger!

Rest assured: There is no substitute for four trained fingers on the fretboard. Sure, some of guitar’s greatest stylists don’t always use their pinkie in solos, but that doesn’t mean they can’t. The world’s finest pickers employ all of their fingers in subtle ways, be it creative chord moves or tasty phrasing approaches.

In this lesson, we’re going to combat the pinkie problem through a combination of exercises and just plain ol’ fun things to play, most of which require the pinkie. Use it or lose it!

In our formative years, we guitarists learn heaps of chords and licks than can be played almost exclusively using our strongest digits: the index finger, for barring chords, and ring finger, a pentatonic lick staple.

But many guitarists stick to this tradition for most of their lives, playing only two-note power chords and pentatonic solos. It’s no wonder the pinkie is notoriously weak for some players—it gets no love!

In a nutshell, pinkie coordination and dexterity results from pinkie strengthening. The more strength this nimble finger possesses, the more control you’ll have over it.

In the opinion of many, the best way to do this is not through using fancy “squeeze” gizmos or doing “pinkie curls” but by playing enjoyable musical ideas that force the pinkie into action.

In the end, once your pinkie’s up to par, you’ll find that a whole slew of subjects actually become easier to play.

But be gentle as you “break in” your baby finger. If you’re dealing with virgin muscle tissue, don’t fire up your metronome to top speed and try a million repetitions of these exercises right out of the gate. Start slowly, always keeping your hand relaxed and, at the very least, taking 15-minute breaks within every hour of practice. If anything hurts, heed your body’s natural warning signal and stop for a spell. Then analyze your technique for flaws that might be the source of your pain.

For most pickers, one of the first passages that puts the pinkie in play is the fully fretted boogie pattern.

This type of riff typically revolves around a root-5th power chord sonority (in this case, fretted with the index and ring fingers), with additional chord tones—like the 6th and b7th (both grabbed with the pinkie)—performed along the instrument’s higher strings. The pinkie is responsible for everything played above and beyond the notes in the power chord.

To give your pinkie a workout on this type of passage, play FIGURE 1, moving it down the neck one fret at a time with each repeat, till your fingers reach their maximum comfortable stretching point.

In rock and metal, other common chord moves empowered by the pinkie include “sus”-based figures—riffs at the heart of songs like Ratt’s “Lay It Down,” Van Halen’s “Unchained” and Soundgarden’s “Black Hole Sun.”

As FIGURE 2 illustrates, the pinkie’s role is of utmost importance, used to add key tones to the 2nd string of a major barre chord, thus creating suspension.

Even learning colorful counterparts to basic open-position chords can prime your pinkie for future punishment. For instance, if your open-chord vocabulary is limited to shapes like E, Em, D, Dm, Am, C and certain fingerings for G, A, and F, you’ve managed to avoid your pinkie entirely!

By gaining experience with hipper voicings like Em7, Cadd9, G, A7, D7sus4, and B7 (FIGURES 3A–F)—all shapes common to jangly pop/rock—your pinkie will become a much more willing participant in your playing.

One of the easiest ways to get your smallest digit moving is to play single-note “pinkie” drills using assorted legato techniques.

In fact, due to the physicality involved, exercises using hammer-ons and pull-offs will strengthen your pinkie much more than playing purely picked passages. Also, the slower you do them, the longer your pinkie will be pressed down on the fretboard, thereby intensifying the workout.

Keep that in mind when tackling the basic “pinkie pull-off” licks in FIGURES 4 and 5. Once you’re comfortable playing these exercises as written, try transferring them to lower, heavier strings for further strengthening and conditioning.

Perhaps the easiest way to increase pinkie prowess is to incorporate it into licks you already know.

For instance practicing basic two-string pentatonic licks as indicated in FIGURES 6A–C can dramatically increase pinkie strength. Note that when these types of phrases are used in regions closer to the nut, the wider four-fret span begs for the pinkie’s use anyway! Pentatonic patterns can also be expanded upon, using the pinkie to grab a higher extra note along the 1st string, à la FIGURE 6D, yielding three-notes-per-string pentatonic moves (more on this later). Further, contemplate relearning some of your pet pentatonic bending phrases, using your pinkie (reinforced with other fingers) instead of your ring finger.

As you play through these, resist the temptation to “smash” the meat of your entire pinkie finger down on the string when fretting notes. Press straight down on your pinkie’s tip to fine tune this muscularly challenged digit’s coordination.

The diminished 7th-chord arpeggio in FIGURE 9 (based upon the biomechanics of FIGURE 7A) is one small example of the types of lines that become available with polished pinkie chops.

Once you step outside the basic barre-chord realm and start experimenting with 7th chords and various chordal techniques, you’ll quickly view your pinkie as a worthy weapon.

In funk, for instance, instead of just sitting on one chord and letting your picking hand do all the work, throwing in a few “pinkie embellishments” is a great way to create a more interesting figure. And if you learn classic Hendrix cuts like “Little Wing,” “Bold As Love” or “Castles Made of Sand,” you’ll soon wonder where Hendrix-style rhythm playing would be without the pinkie.

You’ll also find that voicings that feature notes panning a wide interval distance are virtually unplayable without the pinkie, as the pianistic, Holdsworthian “pinkiestretch” etude in FIGURE 10 illustrates.

To further the pinkie functionality, consider practicing three-notes-per-string pentatonic patterns, pedal-point licks and other single-note passages that require the pinkie’s use.

Further, tackling pedal-point licks in your practice sessions—like those in FIGURE 12, where all four fret-hand fingers are involved on each string, each used in alternation with the pinkie—can also lead to a perfected pinkie.

Pedaling activity such as this would be almost impossible without using your pinkie.

Lastly, some of the hippest lead licks ever played draw upon the pinkie’s power to impart a host of interesting and unpredictable bending phrasings (FIGURE 13).